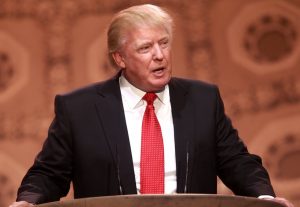 Here are a few passages from an old Vanity Fair profile of Donald Trump. They refer to his alleged interest in the speeches of Adolf Hitler. You can go to the VF site yourself to see that this is real and was written in 1990 by Marie Brenner.

On his German heritage:

Donald Trump appears to take aspects of his German background seriously. John Walter works for the Trump Organization, and when he visits Donald in his office, [Ivana Trump] told a friend, he clicks his heels and says, “Heil Hitler,” possibly as a family joke.

Last April, perhaps in a surge of Czech nationalism, Ivana Trump told her lawyer Michael Kennedy that from time to time her husband reads a book of Hitler’s collected speeches, My New Order, which he keeps in a cabinet by his bed. Kennedy now guards a copy of My New Order in a closet at his office, as if it were a grenade. Hitler’s speeches, from his earliest days up through the Phony War of 1939, reveal his extraordinary ability as a master propagandist.

Trump’s response to being asked about said reading material:

“Did your cousin John give you the Hitler speeches?” I asked Trump.

Trump hesitated. “Who told you that?”

“Actually, it was my friend Marty Davis from Paramount who gave me a copy of Mein Kampf, and he’s a Jew.” (“I did give him a book about Hitler,” Marty Davis said. “But it was My New Order, Hitler’s speeches, not Mein Kampf. I thought he would find it interesting. I am his friend, but I’m not Jewish.”)

Later, Trump returned to this subject. “If I had these speeches, and I am not saying that I do, I would never read them.”

Nazi imagery has cropped up a few times in Trump’s campaign for the presidency. The “88” tattooed onto one of his volunteers, the hateful threats received by a journalist who profiled his wife, and the six-pointed star used to call Hillary Clinton the “most corrupt candidate ever” come to mind.