Pat Robertson: Humans Don’t Cause Global Warming Because There Are No SUVs On Mars
video

Pat Robertson: Humans Don’t Cause Global Warming Because There Are No SUVs On Mars 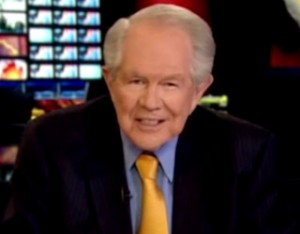 Everyone can calm down now about whether our pollution is having adverse affects upon the atmosphere, The 700 Club‘s Pat Robertson has got this whole global warming thing all figured out. It turns out — dramatic music cue — we’ve all been fooled! Just look at Mars!

After playing a CBN segment alleging that climate scientists and the media were bullying nonbelievers in Europe (“some people have compared France’s news media to North Korea” — say what?), Robertson revealed that he was “not a disciple of global warming.” (Well, you know, except for that one time he sat on the couch with Al Sharpton for Al Gore‘s We Can Solve It Campaign advocating for taking care of our planet.)

“This is weird,” Robertson observed. “You wonder is there a desire to punish themselves? Is it some kind of innate guilt that is eating at the Europeans? They just seem to be intent on destroying themselves.”

“Just keep in mind that Mars, and say, ‘How many SUVs, how many oil refineries are there on Mars?’ And yet, it’s the relationship to the sun that is effecting the climate on Mars,” he surmised.

While some skeptics have tried to point to diminishing “ice caps” on Mars as a sign that global warming is happening there too, climate scientists counter that such changes on the Red Planet can be attributed to “wobbles in the orbit of Mars (as) the main cause of its climate change in the current era,” and inferring Martian warming based on one “ice cap” was ironic, as there is much more “persuasive analogous phenomena” on Earth.

(On) Mars we have one spot melting, which leads us to believe that … one spot is melting.