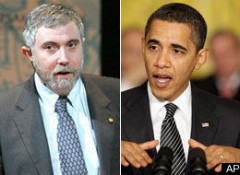 Wow. It would seem that in a very short period of time President Obama has not only lost a lot of independent support (i.e. Massachusetts…those folks were not all Tea Partiers, by a long shot) but he may be losing his core support also. There were signs that hard core Liberals were getting frustrated with the President late last year when it became apparent he was not going to go to bat for the public option, but that’s nothing compared this scathing blog post titled “He Wasn’t The One We’ve Been Waiting For” [!!!] from fellow Nobel Prize winner and Liberal stalwart Paul Krugman. It’s a doozy.

Health care reform — which is crucial for millions of Americans — hangs in the balance. Progressives are desperately in need of leadership; more specifically, House Democrats need to be told to pass the Senate bill, which isn’t what they wanted but is vastly better than nothing. And what we get from the great progressive hope, the man who was offering hope and change, is this:

Maybe House Democrats can pull this out, even with a gaping hole in White House leadership. Barney Frank seems to have thought better of his initial defeatism. But I have to say, I’m pretty close to giving up on Mr. Obama, who seems determined to confirm every doubt I and others ever had about whether he was ready to fight for what his supporters believed in.

And…scene. That has got to hurt. Also, it’s worrisome for the White House: if Krugman decides to turn this into a theme for his print columns (this was a blog post) he could do some real damage. That said, hyperbole much? Also? It is January, I’d say there’s at least a 50% chance Krugman will be penning and Obama Returns post before the year is out.