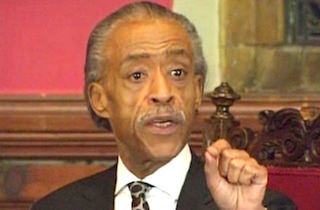 Byron Allen, a plaintiff in a $20 billion lawsuit against Comcast for racial discrimination, accused the media conglomerate on HuffPost Live Friday of paying off Al Sharpton as racial “cover” at the expense of market share for 100% African-American owned media ventures.

“AT&T spent more money throwing Al Sharpton a lavish 60th birthday party than they spend on Ebony magazine, which is a magazine that’s been around for 70 years,” Allen told host Caroline Modarressay-Tehrani. “He is the least-expensive negro. Instead of spending real money, with real 100% African-American owned media, it is easier to give him $50,000 to give them cover.”

The suit alleges, among other things, that Comcast paid off Sharpton to hang fire on criticisms of Comcast’s merger with NBCUniversal, which the plaintiffs believe excluded African-American media properties.

“The industry spends about $50 billion a year licensing cable networks in which 100% African American-owned media receives less than $3 million per year in revenue,” Allen alleged. “It creates generational wealth and market caps that do not exist in our community, because they’re able to pay people like Al Sharpton cover not to truly do business with 100% African-American owned media.”

Allen also accused President Barack Obama of collusion with Comcast. “Obama allowed the biggest media merger in the history of humankind, and true 100% African-American owned media is not included,” Allen said. “President Obama has been bought and paid for.”

Watch the clip below, via HuffPost Live: