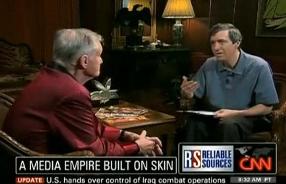 Unsurprisingly, Hefner has a very pro-traditional media point of view.

“You can go on The Huffington Post now, and with two clicks, you can find topless photos of the latest starlet,” said Kurtz. “Has [the media’s embrace of sex] carried the revolution too far? Has it drained all the mystery out of it?”

The very nature of change and progress, so called, you get something and you lose something. The internet was an incredible blessing in terms of communication, but in the process, people are less informed in other ways. I think that young people have a less sense of who they were, or who we were, than they are, than when I was growing up. I think that reading is different on the internet than it is for books and newspapers and you don’t retain as much.

Well I’m not completely sure what Hefner doesn’t like about the internet, but there definitely is something. Meanwhile, despite Playboy losing more than a million dollars in the first quarter of 2010, Hefner says “the brand is so hot I want to take advantage of that opportunity,” and he plans to try to buy the magazine and take it private.

Here’s the first segment of the interview: