put your phone down 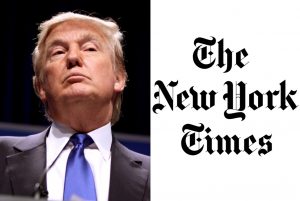 Well, it’s not even 7 a.m. EST yet on this frigid cold Tuesday and already President-elect Donald Trump is hard at work… on his Twitter feed.

The man who will become Commander in Chief in only 58 days fired off a number of Tweets Tuesday morning aimed squarely against the “failing” New York Times, announcing the he had canceled his planned meeting the Gray Lady. Trump was expected to meet with the Times at Trump Tower Tuesday, just one day after he met with — and reportedly railed into — a number of prominent media organizations Monday.

I cancelled today’s meeting with the failing @nytimes when the terms and conditions of the meeting were changed at the last moment. Not nice

Perhaps a new meeting will be set up with the @nytimes. In the meantime they continue to cover me inaccurately and with a nasty tone!

The failing @nytimes just announced that complaints about them are at a 15 year high. I can fully understand that – but why announce?

Until a new meeting can be arranged between the media outlet and the President-elect, “…they continue to cover me inaccurately and with a nasty tone!” he writes.

On Monday, Trump’s meeting with some of the biggest names in political media — a gathering that included George Stephanopoulos, Wolf Blitzer, Gayle King, Charlie Rose, and dozens of others — was described by one source to the New York Post as a “fucking firing squad.”

The source told the Post, “Trump started with [CNN chief] Jeff Zucker and said ‘I hate your network, everyone at CNN is a liar and you should be ashamed,'” adding, “The meeting was a total disaster.”

UPDATED — 7:32 a.m. EST: The Times‘ Assistant Masthead Editor Clifford Levy took to Twitter with the Gray Lady response, noting, “We did not change the ground rules at all and made no attempt to.” He noted that the paper was unaware of the changes until Trump’s Tweets Tuesday morning.

.@realDonaldTrump cancelled his meeting w/@nytimes. Our response: “We did not change the ground rules at all and made no attempt to.” pic.twitter.com/uzyto91bC2