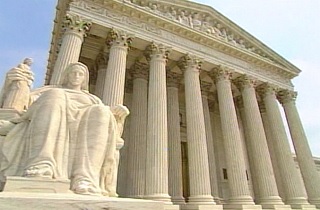 The Supreme Court of the United States un-made history Tuesday by striking down a key provision of the Voting Rights Act of 1965, upholding the pre-clearance provision in Section 5, but ruling that the criteria for pre-clearance set forth in Section 4 is unconstitutional. In a written statement, President Obama said he was “deeply disappointed” in the Court’s decision, and called on Congress to “pass legislation to ensure every American has equal access to the polls.”

Here’s the President’s full statement, via email from The White House:

I am deeply disappointed with the Supreme Court’s decision today. For nearly 50 years, the Voting Rights Act – enacted and repeatedly renewed by wide bipartisan majorities in Congress – has helped secure the right to vote for millions of Americans. Today’s decision invalidating one of its core provisions upsets decades of well-established practices that help make sure voting is fair, especially in places where voting discrimination has been historically prevalent.

As a nation, we’ve made a great deal of progress towards guaranteeing every American the right to vote. But, as the Supreme Court recognized, voting discrimination still exists. And while today’s decision is a setback, it doesn’t represent the end of our efforts to end voting discrimination. I am calling on Congress to pass legislation to ensure every American has equal access to the polls. My Administration will continue to do everything in its power to ensure a fair and equal voting process.

The 15th Amendment says that “The right of citizens of the United States to vote shall not be denied or abridged by the United States or by any State on account of race, color, or previous condition of servitude,” and specifically states that “The Congress shall have power to enforce this article by appropriate legislation.”

What the court did today was to decide that despite exhaustive hearings and data, the Congress no longer has the power to enforce the 15th Amendment by appropriate legislation, but by whatever 5 Supreme Court justices think is appropriate. They found nothing new in the law that was unconstitutional, only the judgment of Congress that the provision was appropriate.

From SCOTUSBlog’s “Plain English” explanation of the decision:

Today’s holding in Shelby County v. Holder, in Plain English: Today the Court issued its decision in Shelby County v. Holder, the challenge to the constitutionality of the preclearance provisions of the Voting Rights Act. That portion of the Act was designed to prevent discrimination in voting by requiring all state and local governments with a history of voting discrimination to get approval from the federal government before making any changes to their voting laws or procedures, no matter how small. In an opinion by Chief Justice John Roberts that was joined by Justices Scalia, Kennedy, Thomas, and Alito, the Court did not invalidate the principle that preclearance can be required. But much more importantly, it held that Section 4 of the Voting Rights Act, which sets out the formula that is used to determine which state and local governments must comply with Section 5’s preapproval requirement, is unconstitutional and can no longer be used. Thus, although Section 5 survives, it will have no actual effect unless and until Congress can enact a new statute to determine who should be covered by it.