President Obama Gets Important Campaign Endorsement From ‘DJs For Obama’

President Obama Gets Important Campaign Endorsement From ‘DJs For Obama’ 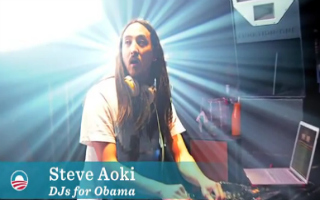 If you ever thought to yourself: “Gee, I wonder who Steve Aoki is voting for this year?” look no further: he supports Obama. And he wants you to do the same.

In a new ad put out by the Obama campaign, “DJs for Obama” makes the case for re-electing the president, with brilliant narration from DJ Cassidy: “DJs are about motivation, inspiration, celebration. That’s why I think it makes such perfect sense to not only celebrate this man, but motivate people to re-elect him.”

He continues to make the case for Obama with this hilarious bit of oblivious nonsense:

So… which is it? Make an informed decision on my own, or listen to DJ Cassidy and “go” with Barack Obama? So many tough choices!!

The ad shows a slew of deejays who have signed on with “DJs for Obama,” including Aoki, DJ Rashida, and DJ Irie. However, well-known DJs like Skrillex and Deadmau5 are absent from the video, and so we have yet to find out whether Obama will capture the “I like to listen to the sound of dying horses” sect of the population that actually enjoys listening to Skrillex. (Spare me, Skrillex fans. You’re just like insufferable Phish fans with the “You have to see them live, man” crap.)