Oops: British Military Official Warns That It Will Take Them Two Years To Recover From The Olympics

Oops: British Military Official Warns That It Will Take Them Two Years To Recover From The Olympics 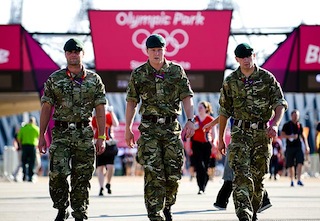 I’ve always felt that there was something suspicious going on with the Olympics. Every few years, the entire world somehow comes together and cooperates in pretending that race walking is a thing that should exist? There’s got to be some ulterior motive. My personal theory has always been that the Olympics is nothing but a front for a secret plot to get humanity’s greatest athletes all in one place to they screw the heck out of each other and spawn some kind of human master race that will be needed to fight off the inevitable war against the machines (Think about it. It makes sense). However, it looks like there’s something even more unsettling going on. It now appears that the Olympics were purposefully designed to weaken England’s military!

Or, at the very least, that appears to have been the result.

British Wing Commander Peter Daulbyspoke to The Guardian and informed the paper that the military’s forced have been greatly depleted by their need to employ tons of men and resources purely for the games. It was always going to be a lot but, apparently, the number of men had to shoot up from 5,000 to 18,000 when it was discovered that security concerns had been underestimated.

“‘We were originally planning to provide niche capabilities,’ said Daulby. ‘When the requirement for venue security was doubled, that was a bit of a game changer. We had to generate 18,000 people. That does not mean that there are 18,000 spare people. It means that the government has prioritised [the Olympics].

‘It will take two years to recover from this, to get back to normal, to get everything back into kilter. You can’t expect them to go back to normal routine very easily.'”

As Gawker points out, this means only one thing; it’s time for someone to invade England.

But the question is who put this whole sinister plan into motion? Tons of countries are involved in Olympic planning and, with England owning practically everyone at some point, everyone has a motive. Really though, I think this was an inside job…from Daulby himself!

I mean, he’s going to a major newspaper and saying that his army has been weakened. Even if you’re trying to keep your funding from being cut, that seems like bad strategy. It’s basically like using FourSquare to tell robbers when your apartment is empty.

Clearly Daulby is working for someone. It’s unclear who though. Whatever the case, I’m going to beat them to the punch. I plan on heading to England next week and declaring myself King. If anyone wants to join me, I’ll be auctioning off castles to the highest bidders.