Obama On Koran Burning: “This Is A Recruitment Bonanza For Al Qaeda” 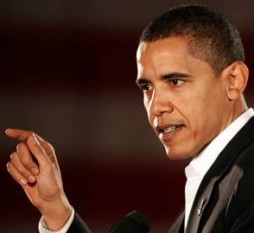 So the Koran-burning Florida pastor with a congregation of 30 people has in less than a week managed to get the attention of the nation’s top general, the Secretary of State, and now the President who says Jones is creating “a recruitment bonanza for Al Qaeda.” At this point it’s probably doubtful even the president can swerve Jones and his tiny group of followers from their plans and sadly, as much as anything else, this whole debacle will probably end up serving as a lesson to spotlight-starved ‘crazies‘ everywhere.

In the meantime, here’s what President Obama told George Stephanopoulos yesterday regarding Pastor Jones’ determination to burn a bunch of Koran’s on Sept 11.

If he’s listening, I just hope he understands that what he’s proposing to do is completely contrary to our values of Americans. That this country has been built on the notions of religious freedom and religious tolerance. And as a very practical matter, as commander of chief of the Armed Forces of the United States I just want him to understand that this stunt that he is talking about pulling could greatly endanger our young men and women in uniform who are in Iraq, who are in Afghanistan. We’re already seeing protests against Americans just by the mere threat… this is a recruitment bonanza for Al Qaeda. You know, you could have serious violence in places like Pakistan or Afghanistan. This could increase the recruitment of individuals who’d be willing to blow themselves up in American cities, or European cities. You know and so you know, I just hope that, he says he’s … he’s someone who s motivated by his faith.

Stephanopoulos also asked Obama whether it was frustrating to have to deal with this nonsense (my word, not his): “He’s a pastor who’s got 30 followers in his church. Does it make you feel helpless or angry?”

What Obama might have said here, with good reason, is he wouldn’t have to deal with the “fallout” if the media didn’t insist on using some nutjob pastor in Florida as hyperbolic filler to gin up reader and viewer response. However, what he actually said was, essentially, that this is the price we pay for freedom of speech.

It, well it is frustrating. Now, on the other hand, we are a government of laws. And so, we have to abide by those laws. And my understanding is that he can be cited for public burning. But that’s the extent of the laws that we have available to us. You know, part of this country’s history is people doing destructive or offensive or harmful things. And yet, we still have to make sure that we’re following the laws. And that’s part of what I love about this country.