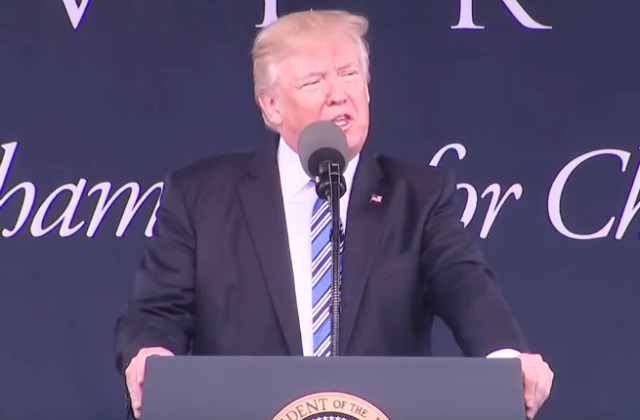 The battle for the 6th district seat once held by ex-Speaker of the House Newt Gingrich has consumed both parties in recent weeks, becoming the most expensive House race in U.S. history. The nail biter contest pits Republican Karen Handel against Democrat Jon Ossoff.

Like much of the political peanut gallery, President Donald Trump has also been keenly following the contest. On Tuesday, the Commander in Chief took to Twitter to issue his closing argument for Handel and slamming her challenger.

Democrat Jon Ossoff, who wants to raise your taxes to the highest level and is weak on crime and security, doesn’t even live in district.

KAREN HANDEL FOR CONGRESS. She will fight for lower taxes, great healthcare strong security-a hard worker who will never give up! VOTE TODAY

It’s not the first time Trump has weighed in on the contest. During an earlier round of voting where Ossoff narrowly failed to win an outright victory, the president repeatedly waded into the race from 1600 Pennsylvania Avenue.

Democrat Jon Ossoff would be a disaster in Congress. VERY weak on crime and illegal immigration, bad for jobs and wants higher taxes. Say NO

Republicans must get out today and VOTE in Georgia 6. Force runoff and easy win! Dem Ossoff will raise your taxes-very bad on crime & 2nd A.