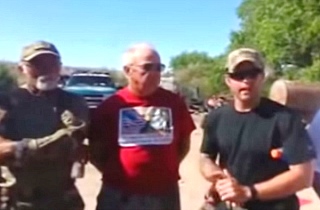 Infighting between two factions of heroic patriots stationed at Cliven Bundy‘s ranch in Nevada reached a fever pitch earlier this week, with a group of aggrieved militiamen turning against the Oath Keepers. The splintering of the once-unified front is surprising, unless of course you’ve ever seen what happens when a group of children start crying over whose turn it is to play with the Legos.

The trouble started, the Southern Poverty Law Center explains, when a member of the Oath Keepers received a very reliable report, from a contact in the Defense Department, that Attorney General Eric Holder had approve a drone strike on their big boy dress-up army man game. And so Oath Keepers founder Stewart Rhodes determined that he had to get his boys out of –-

Sorry. Ahem. Rhodes determined that it would no longer be safe for his group to stay inside of “the kill zone” where Holder and Obama were most definitely coming to bomb them. With a drone. Maybe a nuke-equipped drone? Who’s to say.

Yes, it is true: Oath Keepers received a bizarre bit of leaked info which could not be verified but which also could not be ignored. Our contact is connected with the Department of Defense – or ‘was’. The info we received stated that Eric Holder of the Department of Justice had okayed a drone strike on the Bundy ranch near Bunkerville, Nevada, within a 48 hour period over the weekend of April 26/27, 2014.

That, fortunately, turned out to be ‘dis-info’ – a false rumor. And though it came from a trusted source, Oath Keepers could neither prove nor disprove it.”

This mis-info came from a trusted source, a former Special Forces soldier with significant connections inside DOD. Though the info was unbelievable, in the present climate generated by the BLM and Senator Harry Reid (who called the ranchers and their friends “domestic terrorists”), Oath Keepers decided that the info must be regarded as indicating that a drone attack was at least “possible”.

Also possible: Obama riding into the camp in a blonde Khaleesi wig on the back of a dragon.

Naturally, Rhoades and company didn’t want to stick around to find out. But their turning tail and running wasn’t taken lightly by the rest of the armed toddlers.

One of the militiamen, a Montana “patriot” named Ryan Payne who has taken to speaking for the group, explained his taking umbrage to this “dereliction of duty” and “desertion” in the video below. The penalty for desertion, you might be wondering, even in the pretend army, is death (As a side note, has anyone explained why these people don’t have jobs to go to?):

“We are open to gentlemanly conversation. But this man and the people that obeyed that order have violated my personal creed. You don’t fucking walk in and say, ‘I’m sorry,’ and you’re back in, brother. You can walk in and say you’re sorry, and you’re lucky that you’re not getting shot in the back. Because that’s what happens to deserters on the battlefield.”

It gets even stupider from there. Daily Kos has more transcript from some of the fracturing of good will, and fracturing of the boundaries of logic and common sense, between the two rival gangs.

Watch Payne tell his fellow patriots about the Oath Keeper’s “cowardice” before they vote them off the Bundy board: