GOP frontrunner Donald Trump‘s closest competition these days may come in the form of a certain Senator from Texas, but back in 2007, it was another Texas force that was hitting the real estate mogul a bit harder: Stone Cold Steve Austin.

Even the name itself conjures up memories of countless hours of excitement from my childhood, and the (now admittedly) absurd world of being a pro Wrestling fan. But to be honest, who wasn’t? It seemed like every kid at school was mimicking the Rock Bottom Finisher, and I’ll never forget being pinned in the Sharpshooter by my older brother (who was also, at the time, much larger).

But there was simply no move like the Stone Cold Stunner in all of pro Wrestling, and wouldn’t you know it? Our future President (oh God) once experienced the wonderful devastation for himself, live from Detroit, Michigan as part of WrestleMania 23.

The event itself was a clown show and a half; The Apprentice was already a huge television success, and the Trump brand was as bright as ever. The event was even billed as ‘Hair vs. Hair’, pinning Trump against WWE CEO Vince McMahon himself: 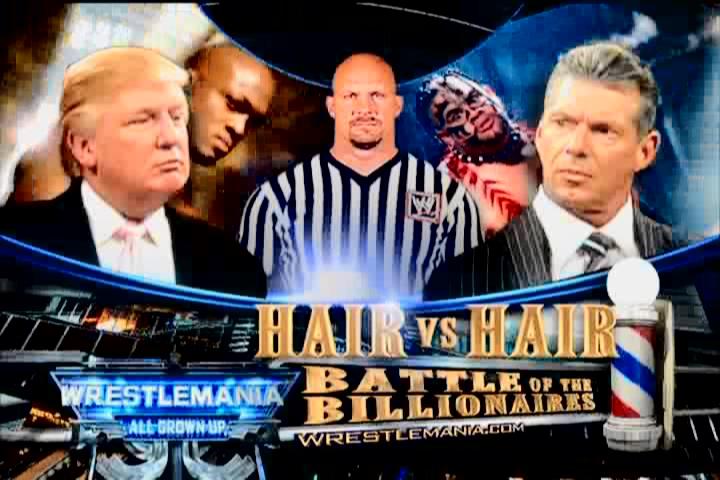 Yes, that there on the left is the man who may very well have all the launch codes next year and unfettered access to the little red button, among many, many, many other Presidential ambitions.

First, the necessary backstory. The Trump v. McMahon dynamic was born a ways before WrestleMania 23; in fact, during the official Vince McMahon “Fan Appreciation Night” earlier that year, Trump interrupted and dropped a ton of cash all over the arena floor. Insulted — or, I should say “insulted” — McMahon challenged Trump to what became known as the “Battle of the Billionaires”: a match where each man would be represented by a wrestling surrogate. Either McMahon or Trump would be forced to have his head shaved if his wrestler lost.

McMahon chose a wrestler named Umaga; Trump chose Bobby Lashley. Hilarity and absurdity ensued, with Steve Austin serving as special guest referee. At one point, Trump sends himself FLYING into McMahon, tackling him to the ground, and peppering him with punches to the head.

Please reread that last sentence a few times to make sure it sinks in.

In short, Lashley — and therefore soon-to-be-President Elect Donald J. Trump — won (maybe Trump should consider rolling out Lashley in time for surrogate season on the campaign trail). For good measure, Trump suffered a Stone Cold Stunner from the bulging arms of Austin because that’s the sort of nonsensical shit that happens at WrestleMania. Did Vince McMahon get his head shaved?

Oh sweet Jesus, did he ever. 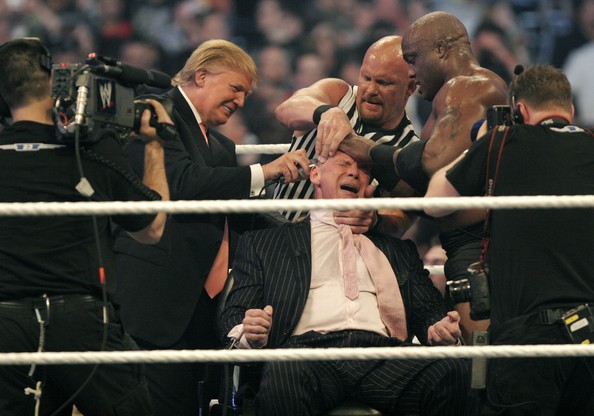 The Battle of the Billionaires at WrestleMania 23 may be a distant memory from the 2016 campaign trail; I can’t imagine that many Hawkeye faithful in Iowa are asking the GOP frontrunner about that night in Detroit, nor do I think that Megyn Kelly will include many questions about surviving a Stone Cold Stunner at the next Republican debate. But it’s fun to stop and look back to remind ourselves that truly, Donald Trump is an entertainer first and foremost; dare I say that his run for the White House may ultimately prove as calculated and scripted as a jump from the top rope.

The final five minutes of Wrestlemania 23 are here. And seriously — I can not recommend it enough:

… and the post-shave Donald Drop, as promised:

J.D. Durkin is the Senior Editor of Mediaite. He dreamed about being a professional wrestler before settling on the far-more-absurd path of political columnist. You can follow him on Twitter @MediaiteJD.