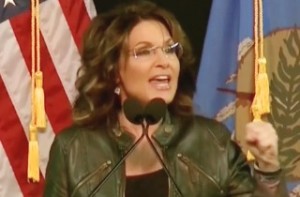 If there’s anything Republicans can agree on, it’s that Obama is to blame for everything. There’s even a bill making its way through the House that will rename every tectonic plate intersection in the United States “Obama’s Fault,” followed by a numeric designation. Thanks to Obama, it won’t pass.

The other thing they seem to agree on is that people with mental health issues and/or domestic abuse charges should not be allowed to own guns, or at least they agree when it allows them to bash President Obama for trying to accomplish that very goal, or to do anything at all about gun violence. Yeah, I don’t get it either.

This news cycle, however, has afforded the media a chance to put Republican concern-trolling about guns in the hands of unstable domestic abusers to the test, thanks to Sarah Palin. At a Donald Trump rally Wednesday, Palin brought up her son Track Palin’s domestic violence arrest, and blamed Obama and PTSD:

In the wake of President Obama’s executive actions on gun policy, Republicans tried to make themselves sound reasonable by claiming they favor keeping guns away from domestic abusers and the mentally ill, they just don’t like Obama doing any of that by using presidential authority. Well, Track Palin fits both of those bills:

“(She) told Palin that she had called the cops even though she had not, in attempt to calm him down and to scare him away from ‘touching her,’” the affidavit said. “Palin approached (her) and struck her on the left side of her face with a closed fist.”

The woman then told police she fell to the ground in the fetal position and Palin kicked her in her knee before picking up her phone and throwing it.

According to the affidavit, the woman grabbed her phone and went inside, where she said she found Palin holding a gun with the barrel pointed near his face and saying, “Do you think I won’t do it?”

“(The woman) was concerned that he would shoot himself and ran outside and around the house,” Kappler wrote. She eventually hid under the bed, where she was discovered by police.

The woman said she tried to call 911 and one of Palin’s sisters several times, but believed her phone was damaged when it was thrown. She was eventually able to call out using the speakerphone.

Police later found an unloaded AR-15 on the kitchen counter. Palin had a blood-alcohol level of .189 based on a breath test, the affidavit said. The woman had a bruised and swollen left eye, as well as a “small red area” near her knee, where she said Palin kicked her. Police took photographs of the trauma to Palin’s face.

As disgraceful as it is for Sarah Palin to use her own son’s troubles, and his girlfriend’s suffering, to score a cheap political point, it’s even more disgraceful for our politicians and our politics to ignore such a clear cry for help, from both parties involved. Here is the media’s opportunity to unmask that cowardice.