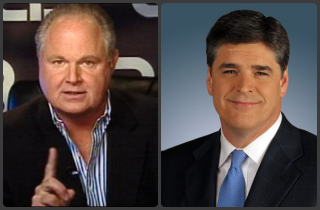 In the midst of Rush Limbaugh‘s reported battle with Cumulus Media, which buys his radio show’, new details are emerging today about just how badly the conservative talker’s advertising woes have become. And now, it seems to be extending beyond just Limbaugh.

We reported yesterday, based on our own sources in the radio advertising world, that as a result of the backlash to Limbaugh’s 2011 “slut” comment about Sandra Fluke, “ the vast majority of national advertisers” refuse to air their commercials during The Rush Limbaugh Show. A report in Radio Ink Magazine suggests those advertising woes are even worse than previously thought.

While its unclear how many advertised with the shows in the past, this revelation is significant because it is the first time Limbaugh’s #2 competitor Sean Hannity has been brought into this conversation about advertiser aversion; and because, if true, a 48 out of 50 (96%) rate of top advertisers wanting nothing to do with the shows represents a rather striking figure.

Limbaugh’s camp has made it clear in recent days that they are unhappy with Cumulus CEO Lew Dickey‘s blaming of any revenue shortfalls on his show; and, again, it’s unclear how many of these 48 companies advertised with Limbaugh and Hannity in the past. But these industry sources seem to indicate that perhaps Dickey’s accusations are credible.

We put in a call to Clear Channel’s Premiere Radio Network which distributes both shows, . Their spokesperson hit back at Radio Ink’s source, asserting that the 48 out of 50 figure is wildly inaccurate:

“That statement is completely inaccurate. A number of the top spenders in the medium use talk radio to promote their brands and sell product, and many of them use The Rush Limbaugh Show and The Sean Hannity Show as the driving force of their marketing efforts.”