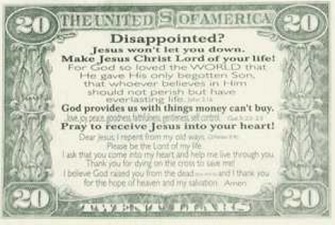 It’s not every day that you see someone stand up to something that is truly evil, like oppressive sports directors or Ronan Farrow, so when you do, you gotta recognize. One restaurant manager in Charlotte, North Carolina is taking on the most evil thing since Kylo Ren shaved his pet space-hamster with a lightsaber, namely those awful Bible tracts disguised as $20 bills that the worst people in the world are apparently leaving as tips. From Wonkette:

Anyone who has ever been a server for any length of time has at one point or another been subjected to a religious tract in lieu of a tip. When you see what looks like a $20, only to have it be the above image, it’s kind of like getting punched in the balls by Jesus. Usually, as is their wont in virtually all matters, restaurant managers don’t really care when their employees get screwed. At most, you might get some sympathy and a pat on the back. One restaurant manager in Charlotte, North Carolina, however, did quite a bit more than that, because she is The Hero We Need.

I’ve seen these tracts before, but usually just left folded on the ground, because apparently every time someone is tricked into bending over and then yelling “F*CK!”, an angel gets its wings. Leaving it as a tip? Eeeevil!

The restaurant’s manager, however, wasn’t about to let this stand, dashing off a stern email to the local pastor:

I am the general manager of Dish (restaurant) in Plaza Midwood. Imagine one of my server’s surprise when she received a small pamphlet (Every one of us will face eternity one day) instead of a tip when she served what I assume was one of your congregation. Her particular religious beliefs are not discussed at work; however, I do know that this pamphlet can not pay her mortgage or her electric bill. It concerns me that someone would consider a pamphlet fair monetary exchange. Suppose your congregation felt it was sufficient to tithe their personal writings instead of 10% of their income. Your church wouldn’t be paying their bills for very long. I think it would be great if you used this in a sermon. Pride, one of the 7 Deadly Sins, is considered, on almost every list, the original and most serious of the seven deadly sins: the source of the others. It is identified as believing that one is essentially better than others, failing to acknowledge the accomplishments of others, and excessive admiration of the personal self (especially holding self out of proper position toward God). I think it could be educational for at least one member of your congregation. Thank you very much for your time.

While it’s true that the Seven Deadly Sins aren’t in the Bible, neither are the Seven Circles of Hell, one of which must be reserved for people who leave these tracts. Hopefully, right next to the Eternal Splattered Men’s Room of Fire.

As it turns out, this particular customer actually did leave a 7.7% tip on the credit card slip, but many of these folks don’t. Just to give you some perspective on that, the federal minimum wage for tipped employees is $2.13, but The Dish’s waitresses have to pay taxes based on sales, and typically pay a portion of sales to other restaurant staffers like bartenders and buspersons. For that $27 meal, the server was paid $2.13 an hour, but had to pay taxes on that check, and likely had to share up to 30% of the almost nonexistent tip with other restaurant staff. On that meal, the tipshare alone would have been one out of the two dollars that were left, and she would be paying taxes on that dollar, too.

Leaving no tip other than the tract is akin to making the server pay for the privilege of bringing back the well-done burger you think is too dry, even though it’s a well-done burger, or fulfilling your generous request to “bring water for the table.” So, yeah, leaving these things as tips is as pure an evil as I’ve ever encountered, and I’ve been to an Air Supply concert, and not while they were big, but way after, where they only wanted to play their new stuff (girlfriend made me).

If, by any chance, you’ve been dying for the staff at a restaurant to put your picture up in the kitchen to make sure you always get “the treatment,” or you’d like to get your ass beat in the parking lot of a strip club after you “make it rain” Bible pamphlets, you can get a pack of fifty for just under four bucks. They even come in Spanish, so you can learn to be cursed at bilingually.