Last night, the official Twitter account of Governor Rick Perry posted a photo taking a shot at the Texas Democrat at the heart of Perry’s indictment and veto scandal. Rosemary Lehmberg was arrested for DUI last year, and Perry threatened not to fund the Travis County Public Integrity Unit unless she resigned.

She did not, Perry delivered on his veto threat, and Perry got indicted as a result. 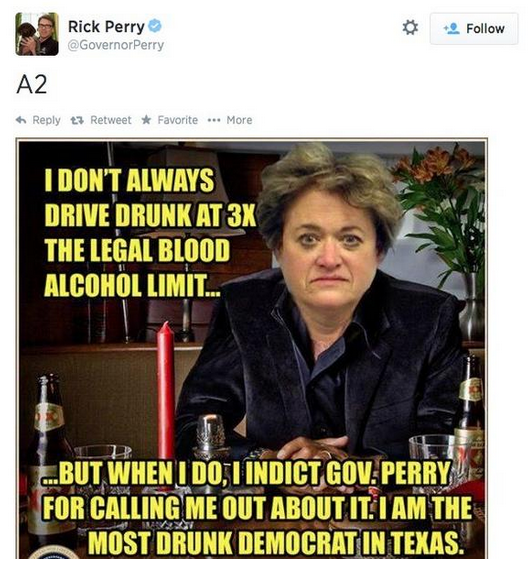 It got noticed enough to catch the attention of plenty of Twitter users, but it was quickly taken down and Perry posted this tweet next.

Rick Perry calling up National Guard to manage his tweets.

Clearly @GovernorPerry will not let two felony indictments bring him down, when he can drunk-tweet himself out of the presidential race

If it's OK for Rick Perry to tweet that Rosemary Lehmberg indicted him, then it's acceptable for me to tweet that he's a power bottom.