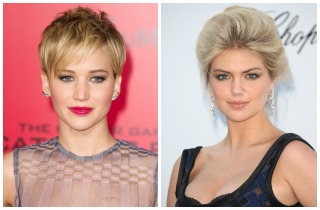 Several different female actresses and celebrities found themselves caught up in a massive hacking campaign yesterday when nude photos of them were posted online. Actress Jennifer Lawrence and supermodel Kate Upton were just two of the victims of this hacking.

And both Lawrence and Upton have not publicly commented yet. Lawrence’s reps, however, issued a statement calling the hacking “a flagrant violation of privacy” and saying, “The authorities have been contacted and will prosecute anyone who posts the stolen photos of Jennifer Lawrence.” Meanwhile, Upton’s lawyer also released a statement on the “outrageous violation of our client Kate Upton’s privacy.”

All of the nude photos obtained by hackers were reportedly taken from Apple’s iCloud backup storage service, even if some of the photos had been previously deleted.

Actress Mary Elizabeth Winstead took to Twitter last night to scold not just the person who leaked her photos, but anyone taking the time out to look at them.

To those of you looking at photos I took with my husband years ago in the privacy of our home, hope you feel great about yourselves.

Knowing those photos were deleted long ago, I can only imagine the creepy effort that went into this. Feeling for everyone who got hacked.

@devincf all good. Just definitely a hackjob, not being released by someone who knows these actresses. For sure.

Actress Victoria Justice and Olympic gold medalist McKayla Maroney also took to Twitter, both saying the photos posted of them are undeniable fakes.

These so called nudes of me are FAKE people. Let me nip this in the bud right now. *pun intended*

the fake photos of me are crazy!!
was trying to rise above it all, and not give "the creator" the time of day.. BUT.. pic.twitter.com/hceQcOxYkJ

In addition, BuzzFeed unearthed screengrabs of 4chan users claiming to have accessed the photos in the first place.

For instance, the screengrab below purportedly shows one user’s desktop, which appears to also have videos that haven’t been leaked with:

And there’s a list that’s going around, reportedly of all the celebrities who were hacked:

Update- 6:50 pm: Kirsten Dunst, another one of the hackers’ targets, broke her silence with this very sarcastic tweet:

Update- Sept. 2, 6:15 pm: An entire subreddit devoted to sharing and discussing the photos emerged in the past few days, and an effort to use the page to raise money for cancer research didn’t turn out well.