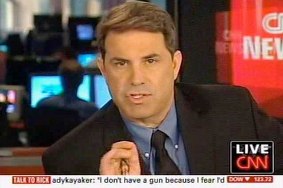 CNN’s Rick Sanchez is not happy with being made fun of constantly on The Daily Show and Colbert Report. It is from this jumping off point that he absolutely unleashed on Jon Stewart and Stephen Colbert, and at times his own network, on Pete Dominick‘s satellite radio show yesterday.

A few minutes later, Sanchez takes back the word “bigot,” changing it to “prejudicial” and “uninformed.”

Later in the interview, Dominick brings up the fact that Stewart is Jewish, so is a minority himself. Sanchez laughs this off:

If that wasn’t clear, the “yeah” was sarcastic. “I can’t see somebody not getting a job somewhere because they’re Jewish,” says Sanchez.

A few other things: Sanchez ended his 8pmET version of Rick’s List today, and Parker Spitzer come in Monday. According to the same blog post, Dominick is starting a weekly Saturday 2:30pmET show on CNN tomorrow. We’ve reached out to CNN for a response.

It is not hard to imagine there may be a significant response. It should also be noted that this is the end of week one for a new boss at CNN, Ken Jautz.