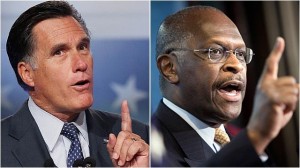 By the time you finish reading this sentence, another poll will have been released. And this poll will likely be touting the opposite result of the previous poll. And in a little while, both of those polls will be rendered obsolete by a third poll. Do you know who’s in the lead for the Republican nomination? No. Nobody does. Because a sea of Rasmussens, Quinnipiacs, Gallups, and Marists have combined to give us a steady diet of polls that provide little more than a long list of conflicting headlines.

Take a look at just this week’s polling results roundup on Real Clear Politics. On Monday, a Gallup poll had Mitt Romney ahead of Herman Cain by two points, while a Washington Post/Bloomberg poll had Romney ahead by eight. On Tuesday, Public Policy Polling had Cain leading Romney by eight percentage points in Iowa. That same day, NBC News/Marist had Romney ahead in Iowa by six. Wednesday, PPP had Cain up eight in the general election, while Reuters/Ipsos had Romney up by four. And on Thursday, a Wall Street Journal/NBC poll said Cain is ahead by the same four percentage points. (As an aside, remarkably, in the WSJ/NBC poll, when asked which candidate they favor, 27% said Cain. He was at 5% in August. And Rick Perry, now at 16%, was at 38% in August).

Margins of error hover in the 4-6% range, but it’s still a mess of methodology and cross-sectioning. Plus, asking someone over the phone who they’re going to vote for — and if they’re even going to vote — could all come crashing down based on something as trivial as rain on election day.

But even the weather may not have anything to do with polls aiming poorly. Two years ago, for instance, likely New York City voters were polled just days before the election, and most results had Michael Bloomberg crushing his opponent, Bill Thompson, by as many as 15 percentage points, even as the Thompson campaign said its internal polls showed a much closer race. On election day, Bloomberg squeaked by with a much tighter victory than he expected, winning by just five percentage points, 51% to 46%.

What does it all mean? That, thanks to the myriad polls popping up on a daily basis, CNN can put up a headline that says “Cain Leads Romney!” while FOX can say “Romney Leads Cain!” And this could be on the same day. Eventually, people may start getting wise to the conflicting polls and just start ignoring them. A worry in the Bloomberg aftermath was that because the Mayor led by such a wide margin, some would-be Thompson voters stayed home, already feeling defeated. That’s not necessarily the case anymore. And it shouldn’t act as a deterrent in any future elections. Ron Paul, for instance, might be polling at about 11%, but add the margin of error to his numbers, subtract the margin of error from Romney’s, factor in that Paul voters are incredibly motivated and mobile, meaning they’ll likely come out for primaries and caucuses in force… and you may have a number much closer that any poll would indicate.

Nate Silver made a name for himself — at least outside of baseball circles — in pointing out the errors in polls. It’s not like this is a new concept. But it seems like this year, more than in 2004 and 2008, the polls are popping up with much more frequency, and far less accuracy. Chalk it up to a still-fluid situation and a possibly-truncated polling season before the first primaries start taking place, but the more polls that are released, the more maddening they become. If Edgar Allan Poe were alive today, there’s a good chance his increasingly-fervent “Bells” would be replaced by the increasingly-frustrating “Polls.”