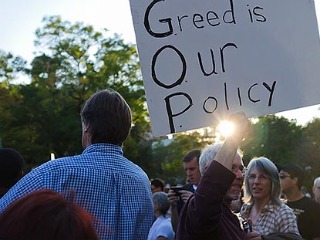 Business Insider’s Henry Blodget has a wonderful post up explaining what, exactly, those participating in Occupy Wall Street are protesting and what it is that they’d like done. Being able to point to a legitimate, official gripe or list of gripes has been challenging because, while many in politics and within the media point to Occupy Wall Street’s lack of central message as a negative, those involved in the protests itself have deliberately balked at setting out just one mission statement to rigidly define the movement.

That said, listening closely to (some of the more serious) dialogue being created as a result of the protests shows that there are indeed certain issues that keep cropping up. Blodget summarizes them thusly:

In other words, in the never-ending tug-of-war between “labor” and “capital,” there has rarely—if ever—been a time when “capital” was so clearly winning.

To drive the point home, his post includes various graphs charting changes in the economy, the job market, unemployment, and corporate profits and CEO salaries. And one of the major “villains” in this story is not some sort of nebulous force called “corporations,” but, very specifically, our nation’s banks, which continue to be extremely frigging greedy. (If you’re a Bank of America customer or recently received a letter from Citibank about their terrible new fee system, you’ll know exactly what I’m talking about.)

Have a look, study the charts, and let us know what you think: Do these gripes fall in line with your idea of the protests? Do they change your view of Occupy Wall Street at all?