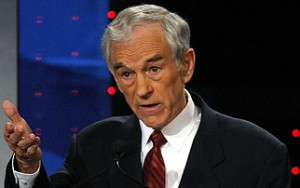 Very few people are taking the secession petitions on the White House website seriously. Despite some of the petitions getting over 25,000 signatures, the White House has not offered any official response (yet). But Congressman Ron Paul, who is serving out the rest of his final term in office, takes the petitions seriously and says on his website that they raise “worthwhile questions.”

RELATED: Megyn Kelly Panel Battles Over Whether The States Could Legally Secede From U.S.

Paul’s argument pushes back against the argument that secession is a fundamentally unpatriotic principle, as many people have made clear in the past few days. Paul says that he wouldn’t hold his breath on any state actually seceding, but argues that it is not treasonous for a state to consider such an option.

Secession is a deeply American principle. This country was born through secession. Some felt it was treasonous to secede from England, but those “traitors” became our country’s greatest patriots.

There is nothing treasonous or unpatriotic about wanting a federal government that is more responsive to the people it represents. That is what our Revolutionary War was all about and today our own federal government is vastly overstepping its constitutional bounds with no signs of reform. In fact, the recent election only further entrenched the status quo. If the possibility of secession is completely off the table there is nothing to stop the federal government from continuing to encroach on our liberties and no recourse for those who are sick and tired of it.

To make his point about states’ rights even clearer, Paul cites ballot initiatives legalizing marijuana in two states while pointing out that the federal government has not exactly been kind about respecting the rights of states to enforce its own drug laws. Paul uses language directly from the Declaration of Independence to make the point that secession is a shining example of freedom of the people.

After all, as he argues, “if people cannot secede from an oppressive government, they cannot truly be considered free.”