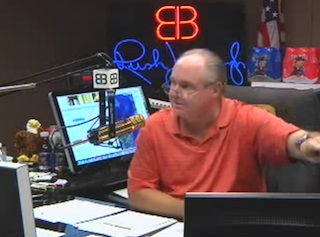 President Obama’s Listening Tour did little to convert his critics, with some complaining about a President campaigning this early while others saw weakness in his traveling through states he carried handily in 2008. There was also that whole PR fiasco about his bus having been built partly in Canada. Today though, new allegations have been spreading rapidly through the Conservative blogosphere, that Obama’s bus tour had been faked and that he and the buses had actually been flown for most of the trip, a huge expenditure both financially and environmentally. Today on his radio show, Rush Limbaugh repeated the allegations, claiming Obama did it all for “imagery.”

However, it appears that the story is the thing that was actually faked.

The story seems to have started in a post on LiveLeak in which the mysterykeeper claims to have heard it from an unnamed AP reporter:

“This is really disgusting! The so called ‘Bus Tour’ was not a bus tour at all !
An AP reporter said that Obama might have ridden these expensive buses only one mile at each stop. Therefore, it wasn’t really a “BUS TOUR”! Obamaspent most of the ‘BUS TOUR’ on an airplane traveling between stops. It looks like Obama has scammed the American people again……..with the help of the liberal media. It’s no damn telling just how much this “show” cost the American taxpayer.
OBAMA’S HYPOCRISY KNOWS NO BOUNDS !!!”

The story spread from site to site until it landed on Limbaugh’s show today where he read an account from SayAnythingBlog. However, the website Human Events has updated their version with a quote from blogger Coldwarrior who attempts to show how the story is pretty darn improbable. Coldwarrior explains that he used Google Maps to show that the distances between Obama’s stops were never more than 59 miles apart, and were usually much shorter.

“Because the distances between some of his stops were as few as 22 miles, and there’s plenty of photos and videos showing him in all of these locations, practically it would have taken longer to get to an airport, load up, take off, land, unload, etc. than to simply just make the drive. And, as you’ll see, there just aren’t the kind of airfields need in that part of the country. I know. I’ve driven much of the route over the years.

So, secondly, even if they had wanted, despite the short distances involved, to fly the buses and/or Obama ahead to the next stop, there simply are not enough airfields in that area of the country that could handle the aircraft involved (certainly not the 747 AF1 and not the C-5A or C-17 cargo aircraft that would have been needed for the buses).”

If a Human Events commenter’s math isn’t good enough for you, though, there’s always the gaggle of lamestream media reporters who follow the President wherever he goes. Mediaite’s White House correspondent Tommy Christopher calls the story “sheer idiocy,” pointing out that a five-minute review of the pool reports from the trip shows that the large contingent of press that travels with the President was with him every step of the way. “There was even one pool report that gave an odometer reading, for crying out loud.”

Even so, Christopher has reached out for comment on the story. We will update when more information is available.

True or not, the story is the toast of the conservative blogosphere. It’s the kind of story that will get quickly passed around from detractor to detractor, each of whom shaking their head at this supposed unbelievable hypocrisy. Sure, most of these people would never vote for him in the first place, but stories like this, repeated enough, can pass into legend, and color a politician’s reputation no matter how hardily they’re disproven.

With that being said, maybe this might actually help Obama if it’s true. After all, those planes were actually built in America, right?

Watch the clip of Limbaugh sharing the story below: