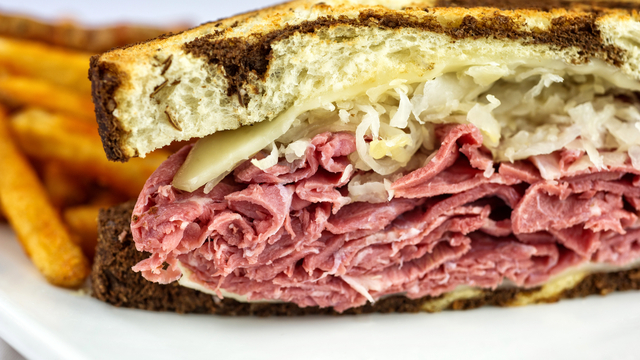 Today, White House Press Secretary Sean Spicer answered April Ryan‘s question about the administration needing to “revamp its image” because of things like its connections to Russia by saying that no connection exists. He then said something that will no doubt be remembered for a long, long time: “If the president puts Russian salad dressing on his salad tonight, somehow that’s a Russian connection.”

There’s a lot to unpack here. First, has Spicer ever eaten Russian dressing? It doesn’t really go on salads. Reuben sandwiches, definitely. But not salads — Twitter was quick to point this out:

@YAppelbaum also, ew. russian dressing goes on a reuben, not a salad. the condiment outrage is unending with this one.

Come on, Spicer. Everyone knows that Russian dressing is for Reuben sandwiches, not salad. https://t.co/S4MFSvW3b8

Russian dressing goes on a reuben, not on a salad.#FakeNews

By “salad,” I presume he means “Reuben sandwich,” the only acceptable use for Russian dressing https://t.co/Uep52eYaB8

Russian dressing is gross – on salads. On a roast beef sandwich or reuben? Heavenly.

@Acosta @seanspicer everyone knows the sole purpose of Russian Dressing is to make a Reuben sandwich. That’s it and that’s all. Salad please

Others interpreted “salad” as “word salad,” and found it made more sense that way:

Sean gave us a word salad with Russian dressing today. Trump is pushing American steel as they unload Russian steel for the pipeline.

@CBSNews Russian dressing on his word salad, that is.

Others, still, used the opportunity to remind us that Russian dressing on a salad from the President might not be altogether surprising, given his preference for well-done steak with ketchup.

Russian dressing on salad, ketchup on overdone steak. I’m guessing the White House chef has a Sizzler on his resume. https://t.co/2sXbKetmvH

The only person who would voluntarily use Russian dressing is the kind of person who voluntarily orders a charred steak with ketchup. https://t.co/cZSA0AUmXx

Let’s be honest, if Trump ever DID eat salad, he’d use Russian dressing.

This is a guy who puts ketchup on his steak.