S.E. Cupp’s Advice To GOP In NY Times: Don’t ‘Be Afraid To Call Out Rush Limbaugh’

S.E. Cupp’s Advice To GOP In NY Times: Don’t ‘Be Afraid To Call Out Rush Limbaugh’ 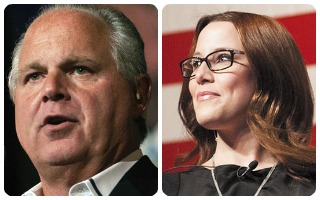 A profile in the New York Times Magazine on Thursday examines if “the Republicans can be saved from obsolescence.” The piece extensively details how the Republican Party allowed Democrats to outpace them by not keeping up with technological advances and creating innovative ways to recruit and train individuals interested in voter outreach.

The profile focuses on the experiences of young Republican strategists like Patrick Ruffini, Erik Telford and Kristen Soltis, but it also delves into the role Republican commentators can have on the party’s electoral prospects. The Times piece quotes MSNBC host and New York Daily News columnist S.E. Cupp who said conservatives cannot be afraid to hold prominent voices in the GOP commentariat, like Rush Limbaugh, accountable when they say thing which are potentially harmful to the Republican brand.

“And we can’t be afraid to call out Rush Limbaugh,” said Goodwin’s fiancée, S. E. Cupp, a New York Daily News columnist and a co-host of The Cycle on MSNBC. “If we can get three Republicans on three different networks saying, ‘What Rush Limbaugh said is crazy and stupid and dangerous,’ maybe that’ll give other Republicans cover” to denounce the talk-show host as well.

But imposing discipline on Limbaugh does not mean abandoning the party’s principles, or ceasing to be vocal and unequivocal about their political views. Cupp said that the tea party, for example, remains a source of political cohesion for the Republican Party and is representative of a set of values shared by most Americans.

“Public polling still puts the country center-right on a host of issues,” Cupp told the Times. “People aren’t repelled by the idea of limited government or balancing the budget or lowering taxes. Those Tea Party principles are incredibly popular with the public, even if they don’t know it. Again, that’s a messaging issue, that’s not a principle issue.”