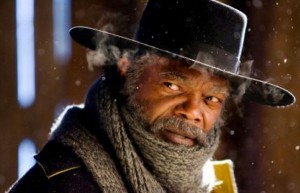 Hateful Eight actor Samuel L. Jackson told reporters that he really, really wanted the person (or people) behind the San Bernardino shooting to be “another… crazy white dude” when he first heard the news.

Jackson sat down with The Hollywood Reporter‘s “Awards Chatter” podcast to discuss his acting career, his role in director Quentin Tarantino‘s latest film and whether or not he has a shot at the Oscars in 2016. However, the topic of racism quickly led to the San Bernardino shooting, terrorism and the place of American Muslims today.

“When that thing happened in France, we were sitting there going, ‘Oh, my God, these terrorists!’ And I can’t even tell you how much that day the thing that happened in San Bernardino,” he said, “how much I really wanted that to just be another, you know, crazy white dude, and not really some Muslims, because it’s like: ‘Oh, shit. It’s here. And it’s here in another kind of way.'”

Jackson expressed sympathy for innocent American Muslims who have never had any connection to anti-American terrorism — other than the fact that their religion and ethnicity are shared by the San Bernardino shooters, the Paris attack gunmen and countless others. He even went so far as to suggest they were the “new young black men” in America today.

“Now, okay, it happened on an Army base and it happened somewhere else. But now? It’s like they have a legitimate reason now to look at your Muslim neighbor, friend, whatever in another way. And they become the new young black men.”