Samuel L. Jackson Shouts At Voters In Pro-Obama Ad: ‘Wake The F**k Up!” (UPDATED With Video)

Samuel L. Jackson Shouts At Voters In Pro-Obama Ad: ‘Wake The F**k Up!” (UPDATED With Video) 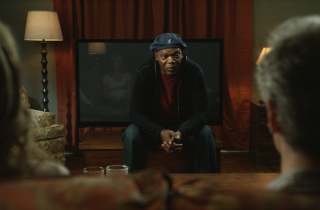 The ad, unsurprisingly titled “Wake the Fuck Up,” features Jackson narrating in a Dr. Seuss-like rhyme scheme a la the audiobook he famously recorded for the mock-children’s book Go the Fuck to Sleep.

Throughout the video, Jackson magically appears in a variety of places, shouting obscenities like “wake the fuck up!” at white suburbanites and potential Romney voters.

Mother Jones reports that in one verse, Jackson says:

Sorry, my friend, but there’s no time to snore.
And out-of-touch millionaires just declared war.
On schools, the environment, unions, fair pay.
We’re all on our own if Romney has his way.
And he’s against safety nets, if you fall, tough luck.
So I strongly suggest that you wake the fuck up.

In other scenes, the website reports, Jackson shouts at “disaffected teens” who once organized bake sales to support Obama’s 2008 bid: “STOP BULLSHITTIN’. GET OUT THERE AND SELL SOME CAKES AND COOKIES. NOOOWWWW!!!” In another scene, he reportedly pops in on a love-making elderly couple to shout at them about Romney’s plans for their Medicare.

JCER, a liberal super-PAC funded mostly by billionaire George Soros‘ son Alexander, aims for comedy with this ad, and hopes to create a future of “mini-memes on social media” mixing satire with politics.

The ad is set to debut Thursday morning..

UPDATE: Watch the full NSFW ad below, via JCER: