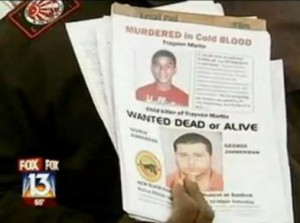 Earlier this week, as an aside to a column about Sean Hannity‘s resurrection of a lie about President Obama and the New Black Panthers, I wondered why the Sanford Police had opted not to charge the group for distributing “Wanted: Dead or Alive” leaflets. Over the next several days, after repeated phone calls and emails, I still don’t have the answer to that very simple question, but I do have some kind of an answer to a question I didn’t ask.

As I said on Tuesday, the decision not to charge the NBPP over the flyers is probably due to a failure to meet the legal standard required, or at least to meet it sufficiently. The Supreme Court ruled, in Brandenburg v. Ohio, that in order to punish this kind of speech, it must meet three tests: intent, imminence, and likelihood to incite “lawless action.”

My guess was that the New Black Panther flyers failed to sufficiently meet the “likelihood” standard, and/or that such a case would have been more trouble than it was worth to prosecute. After a few days of emails and phone calls, I finally heard back from the Sanford Police Department’s Public Information Officer, Sgt. David Morganstern. Here’s how that went:

Tommy Christopher: I’m wondering why SPD decided not to charge the New Black Panthers for distributing those “Wanted: Dead or Alive” flyers a few weeks back.

Sgt. Morganstern: ” We have passed the threats on to the FBI. We have very limited jurisdiction in fielding threats against George Zimmerman as he has not resided in the city since shortly after 02-26-12. ”

Tommy Christopher: So, the threats being made within the city has no effect on jurisdiction? Also, are you saying that’s the reason the police took no action, because of jurisdiction?

So, I checked with the FBI. This is my exchange (again, over the course of two days) with Agent David Couvertier:

Tommy Christopher: Sgt. Morganstern of the Sanford PD says they have referred threats on George Zimmerman to the FBI. I’m wondering what, if any, action is being taken against the New Black Panthers for distributing those “Wanted: Dead or Alive” flyers a few weeks back.

Agent Couvertier: “please recontact Sgt. Morganstern, he has a joint smt re this matter.”

Here’s the joint statement I got from Sgt. Morganstern: ” Law enforcement agencies are aware of the threats and are conducting the appropriate investigations.”

I followed up with Agent Couvertier, to try and clarify:

Tommy Christopher: This is what Sgt. Morganstern sent me:

“Law enforcement agencies are aware of the threats and are conducting the appropriate investigations.”

I’m not trying to second-guess the decision not to charge the NBPP, I’m sure there’s a reasonable explanation for it, I just want to know what it is. First, he said it was a jurisdictional matter, then he passed me off to you. Now, what, you’re both investigating it?

Agent Couvertier: “We are not in a position to comment at this time.”

What does this all mean? Beats me, but it’s tough to guess what they could still be “investigating” about the New Black Panther flyers. Here they are, along with a report that Sanford PD already spoke to the NBPP members who were handing them out. What else do they need, the address to the Kinko’s?