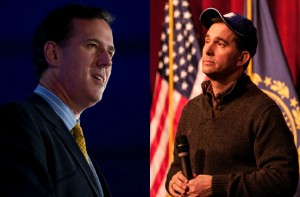 In an interview with The Daily Caller published the day Walker was set to announce his presidential run, Santorum spoke at length about the issue of gay marriage. He warned that while compelling ministers to perform gay marriage was unlikely in the short-term, “in the long-term… if folks who are holding these points of views are treated as bigots and racists, eventually that is going to happen too.”

He was then asked about Tonette Walker, who said in an interview with The Washington Post that she wasn’t fully behind her husband’s opposition to gay marriage, calling herself “torn… It’s hard for me because I have a cousin who I love dearly — she is like a sister to me — who is married to a woman, her partner of 18 years.”

Santorum responded that “spouses matter,” and that he had noticed that Republicans “tend not to be as active” when their spouses disagreed on moral issues. “They tend not to do things that put them out there, fighting this fight, when they know they’re going to… have some disharmony at home,” Santorum said.

When contacted by Mediaite, the Daily Caller’s political reporter Alex Pappas passed along his transcription of Santorum’s remarks:

Spouses matter. I saw that repeatedly with Republican presidents. When your spouse is not in-sync with you, particularly on cultural issues, moral issues — what I’ve seen over time is that presidents as well as members of Congress tend not to be as active on those issues. Not to say they are going to change their positions. They rarely to my knowledge change their positions. They tend not to do things that put them out there, fighting this fight, when they know they’re going to… have some disharmony at home.