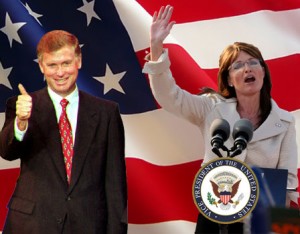 In her new book America By Heart, former Alaska Governor Sarah Palin goes there, ripping the scab off of a long-festering national wound: Murphy Brown’s single motherhood. Following in the footsteps of former Vice President Dan Quayle, Palin takes a swipe at the fictional TV character who became pregnant, and when the father abandoned her, chose to have the child and raise it herself.

Aside from the obvious contradictions, and the questionable wisdom of lining up with a vice-presidential punchline, what brought this on? And when will she finally speak out against AfterMASH? (h/t Media Matters)

Media Matters is having a grand old time picking Palin’s new book apart, but the Murphy Brown reference was so counterintuitive and random, it really jumped out:

Hollywood elites take it on the chin for not being “commonsense constitutional conservatives,” including a few you weren’t expecting, largely because you haven’t thought about them in years.

It was May 1992, and thirty-eight million Americans watched as a fictional television journalist named Murphy Brown, finding herself over forty, divorced, and pregnant, decided to have the child alone. Without the baby’s father. On prime-time television. [Page 116]

Palin goes on to attack former astronaut Steve Austin, whom she labels “The Six Million Dollar Boondoggle,” and takes a swipe at Mr. Spock‘s practice of very unsafe sex.

You’re probably wondering why Palin, who laudably admitted to agonizing over whether to terminate her own over-40 pregnancy, would chide a fictional character who decided to keep her baby. Like Quayle, it’s possible that Palin glossed over the fact that the fictional father wasn’t willing to help her fictionally raise the child. Palin certainly isn’t suggesting that Brown should have had a fictional abortion.

You may also wonder what the difference is between Murphy Brown and Bristol Palin, arguably the most famous non-fictional single mother in the world. Is it just a case of “You say potato, I say potatoe?”

According to Palin, “I’m biased, of course, but given a choice of role models between Bristol and Murphy Brown, I choose Bristol.”

Fair enough, but Bristol and Candice Bergen‘s Murphy Brown share something in common that most women in this situation lack: the financial means to ease the burden of that decision. “Chosen” or not, I wouldn’t dream of questioning the “worthiness” of Palin’s “grouping” to call itself a family, and neither should anyone else. Including Sarah Palin.