SAT Now Includes Reading, ‘Riting, And Reality TV, Much To The Chagrin Of The NYT 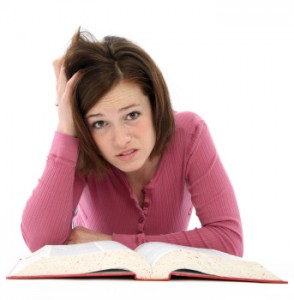 High school students around the country are nervously crunching down on their number 2 pencils as they find themselves in the midst of SAT season. No doubt some have been preparing by going over scores of vocabulary words, taking practice essays, and making sure they’ve got their basic math concepts down pat… when, really, they should have been upping the time they devote to watching Snooki stagger around drunkenly, smelling of Jägermeister and pickle brine.

You see, one of the test’s essay prompts is a question about reality television: “How authentic can these shows be when producers design challenges for the participants and then editors alter filmed scenes?” And, if the online reaction from test takers is any indication, it was something of a doozy. As it would appear, high school kids are just too busy doing things like worrying about essay prompts to watch their peers struggle with being 16 and Pregnant.

Several high schoolers visiting College Confidential – a site for college hopefuls that proudly features the fact that The New York Times has called it “A wealth of information!” – were quoted by The New York Times as part of their report on how “SAT’s Reality TV Essay Stumps Some.”

Former high school student and Runnin’ Scared blogger Joe Coscarelli weighs in on The New York Times‘ report by noting that the test takers quoted therein are, well. Nerds who need to chill. As is the NYT:

What a bunch of weenies these children are.

First of all, everyone taking the SAT is supposed to already know that the prompt doesn’t matter. “The primary goal of the essay prompt is to give students an opportunity to demonstrate their writing skills,” said the SAT’s executive director. Someone else notes, “everything you need to write the essay is in the essay prompt.” But because the paper is catering to these aspirational, upper-middle class whiners (and because it’s a very professional newspaper) they can’t tell it like it is.

He adds that The New York Times is now “more or less a newspaper about getting your kids into an Ivy League school.”

It does seem a little… odd… for the paper to devote an entire article to a question (one of several different prompts, mind you) that happened to confuse a select few college students particularly intent on the college admissions process. Our advice to SAT takers tackling the test’s essay portion? Relax. Find your own, unique writing voice and try to hone in on a thoughtful angle that sets you apart from other test takers. And maybe, some fine day, you’ll emerge from your Ivy League institution of higher learning like a butterfly from its chrysalis, ready to become a New York Times writer intern.