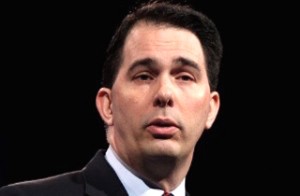 Wisconsin Governor Scott Walker has declared a state of emergency in Milwaukee County and has activated the National Guard in response to the Milwaukee riots last night.

The shooting of a 23-year-old ignited some tensions and led to rioting last night. One officer was hit with a brick, one squad car was trashed, and another squad car and several business were set on fire.

Milwaukee County Sheriff David Clarke called for the National Guard to be brought in earlier today. He said in a statement, “We cannot allow for a repeat of what happened (Saturday) night. I am going to utilize all available resources to accomplish that.”

Walker issued an executive order activating the National Guard and declaring that county state of emergency.

He says there’s been an “escalation of civil unrest” that “poses a threat to public safety.”

In a separate statement, Walker said this:

I commend the citizens who volunteered in clean-up efforts this morning. This act of selfless caring sets a powerful example for Milwaukee’s youth and the entire community. I join Milwaukee’s leaders and citizens in calling for continued peace and prayer.

It is also important for citizens to know that Wisconsin is the first state in the nation to have a law requiring an independent investigation anytime there is a shooting by a law enforcement officer that leads to a death. I will not comment on the specifics of the case as it is now under this investigation. I do, however, hope people will give law enforcement the respect they deserve for working so hard to keep us safe.