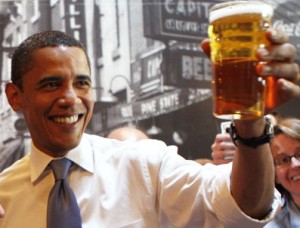 What good is being a guy people want to have a beer with, if you’re not allowed to have a beer with them? According to pool reports, President Obama had to scuttle plans to drink with White House reporters and staffers Tuesday night, during the Iowa leg of his bus tour, when the Secret Service got wind of the idea. The President apologized to reporters on Air Force One, and joked that he hoped Press Secretary Jay Carney picked up the tab, or at least paid for his own drinks.

Just after boarding Air Force One, the president came back to the press section. He apologized for not hanging out with the press for drinks the previous night at the Duck City Bistro in Davenport, Iowa, but he said the plan leaked and the Secret Service nixed the idea.

According to The Washington Times‘ David Boyer, the President busted Jay Carney’s chops for not ponying up for the press corps:

Before takeoff, potus came to press cabin briefly to say he had wanted to join the press last night for a gathering with some senior staff but word leaked out that he might go and the secret service scotched it. Joked that he hoped jay paid for his drinks. He said he had a great time on this bus trip.
“I hope Jay (Carney) picked up the tab,” Mr. Obama said.

The press corp replied quickly, and nearly in unison, that Mr. Carney had not in fact picked up the tab.

The President said he “had a great time” on the trip, and thought it had done the reporters some good, as well. “The more we’re out of Washington, the better off — look, you guys all have smiles on your faces. You’ve had some cookies, some pie.”

It’s good to know that the Secret Service is there to ensure that the Leader of the Free World doesn’t wake up with a tooth missing and a tiger in the bathroom, even if that would make for an awesome story. Of course, there’s a bit of a parental “Do as I say, not as I do” element to this story, since, just days earlier, an off-duty member of the President’s Secret Service detail was arrested for allegedly driving under the influence.

Of course, there’s no colorful anecdote that critics of the President and the mainstream press (two groups with more overlap than a plate of pancakes) can’t blow out of proportion. Previous recreational interactions between the White House press and administration officials have been cause for criticism of the “cozy relationship” between the President and the press. Such criticisms are more overblown that a stunt double in a Linda Lovelace movie. Such gatherings are very infrequent, and there’s no demonstrable link  between them and a weakening of the press corps’ independence. In fact, such interactions can lead to better reporting, from less-guarded sources.