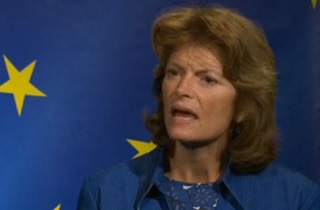 When the Supreme Court heard arguments on two cases involving same sex marriage in early spring, a mini-avalanche of Republican and Democratic lawmakers (and Hillary Clinton) came out in favor of marriage equality. Now that the court is poised to deliver rulings on those cases, Senator Lisa Murkowski (R-AK) has become the third Republican senator to endorse marriage equality, and perhaps the last one to beat history’s buzzer. In an op-ed and a television interview, Murkowski made the small government argument that other Republicans have made, and will continue to make:

The Supreme Court is set to make a pair of decisions on the topic of marriage equality shortly, and the national conversation on this issue is picking back up. This is a significant moment for our nation when it comes to rethinking our society’s priorities and the role of government in Americans’ private lives and decisions, so I want to be absolutely clear with Alaskans. I am a life-long Republican because I believe in promoting freedom and limiting the reach of government.  When government does act, I believe it should encourage family values.  I support the right of all Americans to marry the person they love and choose because I believe doing so promotes both values:  it keeps politicians out of the most private and personal aspects of peoples’ lives – while also encouraging more families to form and more adults to make a lifetime commitment to one another.  While my support for same sex civil marriage is something I believe in, I am equally committed to guaranteeing that religious freedoms remain inviolate, so that churches and other religious institutions can continue to determine and practice their own definition of marriage.

In addition to beating the rest of her Republican colleagues to the punch, Sen. Murkowski is ahead of Democratic Senators Mary Landrieu (D-LA), Joe Manchin (D-WV), Mark Pryor (D-AR), and Tim Johnson (D-SD), each of whom have yet to endorse marriage equality.