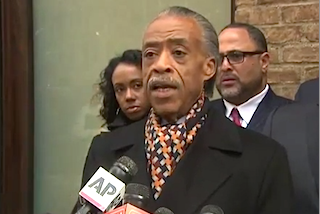 Earlier this week, Al Sharpton said he was considering a call for Sony Pictures co-chair Amy Pascal’s resignation after hacked emails revealed her making racially-insensitive comments about President Barack Obama. Now, after meeting with the studio head, Sharpton still does not seem to know whether he thinks she should keep her job.

Sharpton held a short press conference following the meeting, which also included the Urban League’s Marc Morial, saying he told Pascal, “the climate and environment of Hollywood only confirms the type of language that was used in those emails.”

“Being that Hollywood is an environment that still resembles 1950s America, it is a context that is confirmed by the language,” Sharpton said. He added that he will help set up a “working group” to combat bias against African-Americans in the movie industry.

“The jury is still out with where we go with Amy,” he said.

Sharpton also said he addressed the “serious and dangerous precedent” set by Sony’s decision to pull The Interview from theaters following terror threats from the North Korean-related hackers who previously leaked the emails in question.

At today's mtg w/ Sony we agreed to work towards establishing a basis to address the issues, Ms. Pascal committed to this.