Sigh: No, the ‘Trump Likes to Watch the Gorilla Channel’ Thing Isn’t Real

Sigh: No, the ‘Trump Likes to Watch the Gorilla Channel’ Thing Isn’t Real 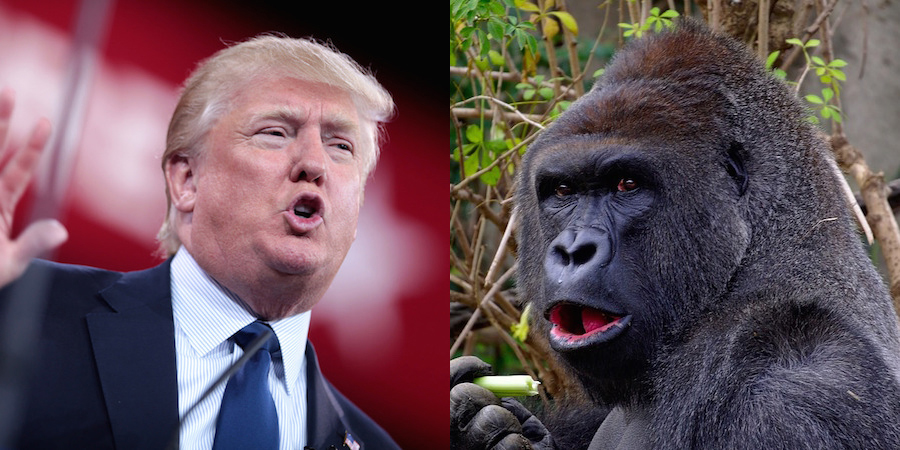 Just how crazy are some of the accusations in Michael Wolff’s bestselling tell-all on President Donald Trump? Crazy enough that an Internet prankster made up an obviously fake excerpt, involving the president’s demand for an all-gorilla television network, with many people on Twitter actually believing that it is true.

Wow, this extract from Wolff’s book is a shocking insight into Trump’s mind: pic.twitter.com/1ZecclggSa

— the gorilla channel thing is a joke (@pixelatedboat) January 5, 2018

It’s not just Twitter eggs believing this story, in which Trump coos to the television as he watches 17-hours daily of “the gorilla network.” Celebrities, along with media folks, have fallen for it as well.

Self-described “trend insider” Eric Garland wrote, in a tweet that has since been deleted, in all caps “THE WHITE HOUSE STAFF MADE A MAKESHIFT GORILLA CHANNEL FOR TRUMP TO WATCH AS MUCH AS 17 TIMES A DAY.”

ahahaha, of COURSE Garland fell for it too pic.twitter.com/KgvUtCbKnj

To his credit, Garland owned up to his mistake, admitting that he got “totally punked,” and even changing his Twitter bio to read “CEO, The Gorilla Channel. Innovating gorilla-based content, 24/7, for heads of state.”

Dammit guys, I got totally punked on the Gorilla Channel thing – but when you've already gotten to "eating KFC in bed," I mean, we're through the looking glass.

Thanks to all who called me out. We keep it clean and Deza-free at Game Theory HQ. ?

MSNBC contributor Scott Dworkin also fell for the hoax and also posted to Twitter to share the news, in a tweet that has since been deleted.

Farhad Manjoo, of The New York Times, is on the fence about the whole thing. Again, one must be reminded that this excerpt claims Trump actually spoke to the on-screen gorillas.

I’m sorry I have a question

Is the gorilla channel thing real or fake?

I thought it was clearly fake but people are talking as if it’s real and I don’t know who’s mistaken.

If you don’t know what I’m talking about don’t look it up because it might be fake.

Don’t tweet screenshots of fake text (of book excerpts, court transcripts, etc) even as a joke.

The jokes just don’t work in a partisan-echo-chamber-feed world where everything is divorced from context and authorship.

Tech blogger Lance Ulanoff assumed it was fake, but you never know, you know?

I assumed it was fake. Read like something @BorowitzReport would write.

Media critic and podcaster Touré pointed out to the Internet that, nope, no siree, he did not believe that whole gorilla network thing.

Though, like Garland, he later realized that perhaps the farce was more obvious than he initially thought.

Thank you to everyone who's pointing out that the gorilla channel story is not true—it’s from a parody site, not Michael Wolff’s book.

Even the great Don Cheadle, War Machine himself, seemed to fall for the fake excerpt, though he did say that it “rings false.”

i concede the first point and like you, and others, don’t know what he said to get the story. i’m more troubled by things like the “gorilla channel” tale which rings false to me. like someone told wolff the story just to see if he’d print it. but hard to know with ???. https://t.co/9TJF0lIW7w

Things got so bad, actually, that the excerpt’s creator, Twitter user @pixelatedboat, not only had to change his username to reflect the factual inaccuracy of the prose but also had to tweet, in vain, begging people to not take him seriously.

Wonder if this new display name will help. Probably not.

— the gorilla channel thing is a joke (@pixelatedboat) January 5, 2018

So this says a lot more about what we’ve been conditioned to believe about Trump than anything else, right? Just look at all of this Googling.

i actually hate all of you pic.twitter.com/KEKmdfIswU

I mean, I nearly believed the tweet myself, for the first half, until the author said the president watches the network “17-hours a day.” He doesn’t have room in his schedule for that. How would he find time to watch Fox & Friends?