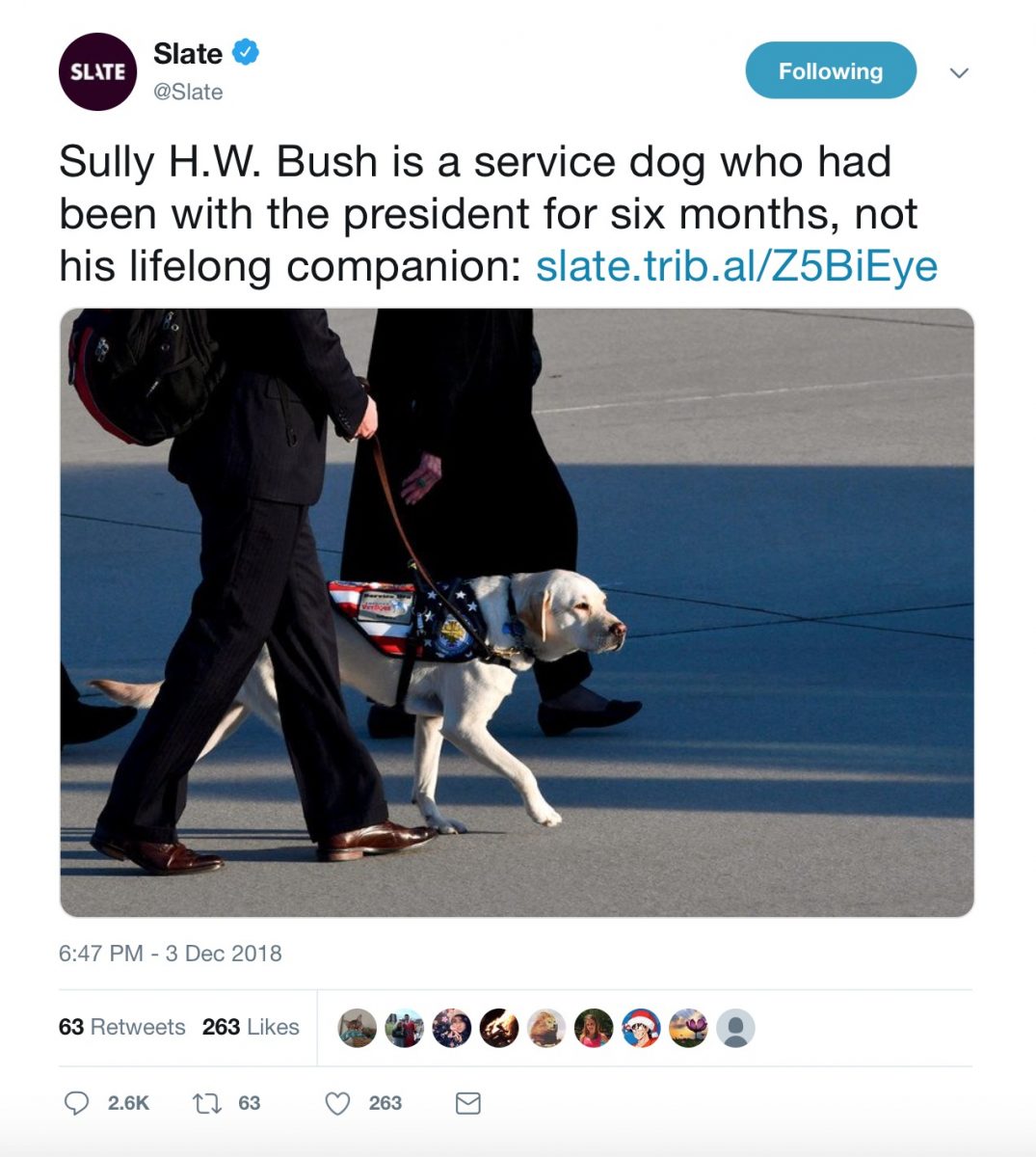 If your Twitter replies drastically outnumber your post’s retweets and likes, you’ve probably got a bad tweet on your hands — a phenomenon known as The Ratio. On Monday night, a tweet from Slate promoting an article on former President George W. Bush‘s service dog ran up an epic ratio. (As of this post’s publication, the tweet has received more than 3,400 replies, and just 83 retweets.)

Sully, the departed president’s labrador retriever, has captivated political observers for the last few days as the nation mourns the ex-president’s passing. People became particularly enamored with the dog thanks to the widely-circulated photo of him lying in front of his owner’s casket.

In response to all of this public adulation, Slate published a piece titled Don’t Spend Your Emotional Energy on Sully H.W. Bush. According to the article, Sully served Bush for less than six months — so it’s not like he was the former president’s beloved lifelong pet.

Animal-lovers are not happy that Slate has rained on their parade:

That Sully was only with George H.W. Bush for six months makes him sleeping next to his casket all the more amazing, you soulless monster. https://t.co/hWzR0eUwGc

A cat wrote this. https://t.co/XIXK4RCClF

“That dog is NOT cute or loyal”

is not the hill you want to die on

Are you serious with this crap?

You just have to shit all over the touching story of a service dog standing by his human. https://t.co/IbfRMIzYak

Is this the most pointlessly dickish piece yet published about GHWB’s passing in the mainstream media? Why yes, yes it is. At least Franklin Foer was making a political argument. This is just the author being a shithead for cash. https://t.co/c7eRfnLEuz

Am furious to learn from this that not only was George H.W. Bush’s service dog not 94 years old, but that he also will NOT be buried alive in Bush’s tomb like an ancient Egyptian pharaoh dog https://t.co/wy572Jup1O

“We have no souls and take no joy in life, so here’s the worst thing we could think of to write” https://t.co/TLLzM99uVq

And you are a bunch of idiots who haven’t had a lucid thought in the last six months https://t.co/oi7S728tqW