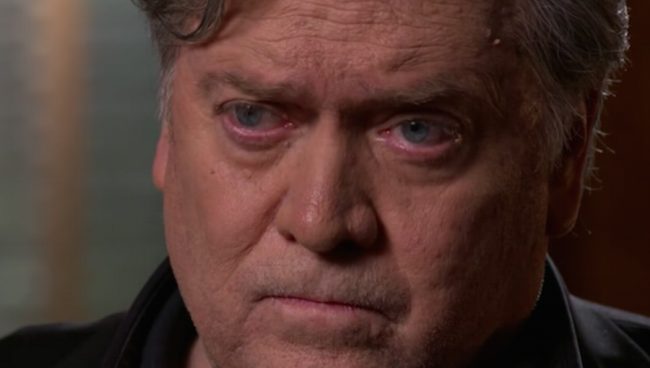 Thursday, we posted about Steve Bannon — who’s been traipsing around Europe — standing behind the blockbuster claims made in Fire and Fury. But now, apparently, the former chief strategist to President Donald Trump has set about getting to work on some all new material for the sequel.

In an interview with The Spectator — a U.K. based magazine — Bannon lavished praise upon Benito Mussolini, the former fascist dictator of Italy.

Bannon told writer Nicholas Farrell that he, to quote the author, “adores” the dictator — to the point where Farrell speculates that the reason Bannon granted him an interview was that he’d read Farrell’s biography on Mussolini.

“He was clearly loved by women. He was a guy’s guy,” Bannon said. “He has all that virility. He also had amazing fashion sense, right, that whole thing with the uniforms. I’m fascinated by Mussolini.”

Of course, it’s rather remarkable for Steve Bannon, who never exactly looks like he stepped off the cover of GQ, to praise anyone’s fashion sense. But nonetheless, there you have it. Benito Mussolini. Style icon. So says Steve Bannon, anyway.