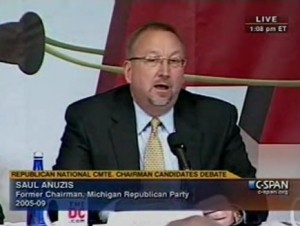 At Monday’s debate between candidates for Republican National Committee Chair, candidate Saul Anuzis made a rather odd, Godwinian boast, promising to “make the trains run on time.”

The phrase is shorthand for organizational competence, but is most closely identified with Italian fascist dictator Benito Mussolini. Ironically, it was Anuzis who, early in President Obama‘s first term, tried to tie Obama’s economic policies to fascism.

Here’s the video, in which Anuzis makes the “trains” reference twice: (from C-Span)

Obviously, Anuzis wasn’t intentionally invoking fascism, but it is an amusing coincidence that he did make such an invocation just months into President Obama’s term:

Workaday labels like “big spender” and “liberal” have lost their punch, and last fall, Senator John McCain of Arizona and Gov. Sarah Palin of Alaska gained little traction during the presidential campaign by linking Mr. Obama’s agenda to socialism.

So Mr. Anuzis has turned to provocation with a purpose. He calls the president’s domestic agenda “economic fascism.”

“We’ve so overused the word ‘socialism’ that it no longer has the negative connotation it had 20 years ago, or even 10 years ago,” Mr. Anuzis said. “Fascism — everybody still thinks that’s a bad thing.”

He’s right, of course, pretty much everyone agrees that fascism is a bad thing, and for those of you saying, “Well, at least they made the trains run on time,” apparently, they did not.

Where he’s wrong, though, is in assuming that “socialist” is overused, but “fascist” is not. There have been plenty of both since then. Maybe he should try calling the Obama administration “Reavers?”