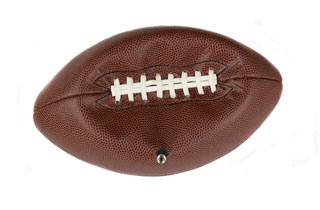 Yesterday, the sports media reported that a “person of interest” was being investigated for his role in DeflateGate, the terrible, awful scandal involving deflated balls that could ruin the NFL’s reputation forever. Or not.

According to those reports, an errant locker room attendant for the New England Patriots took some balls into an “area” between the locker room and the field for some amount of time, during which he could have deflated 11 footballs by 2 pounds per square inch.

Now according to a source, the surveillance footage, provided by the Patriots, shows exactly what went down with that ballboy. From NBC Sports:

First, per a league source, the other “area on way to field” is a bathroom. The bathroom consists of one toilet and one sink and a door that locks from the inside.

Third, from the same source, the evidence comes from a surveillance video that was discovered by the Patriots and given to the NFL early in the investigation.

Fourth, again from the same source, the video shows the employee in the bathroom for approximately 90 seconds.

To recap: Within 90 seconds, a dude walked into a bathroom and precisely deflated 11 footballs, and in those 90 seconds, caused the sporting scandal of the year; nay, the century. This claim comes after the Patriots said that the weather could have caused the balls to contract, that rubbing the balls could have affected the pressure, and Rob Gronkowski‘s claims that he could have Gronked the balls too hard.

“DeflateGate,” or “Ballghazi,” or whatever, is certainly living up to its name.

[Disclosure: Your humble scribe is from Massachusetts and the deflation scandal strikes her to the core of her very being. That said, go Pats.]