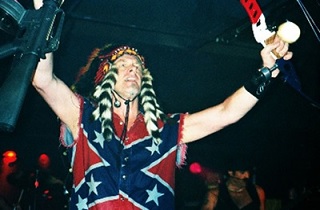 Self-professed fecal draft-dodger Ted Nugent is out with another column for World Net Daily, in which he claims he’s “never met a racist,” but “I Seen Them On TV,” and goes on to say a bunch of offensive garbage about black people. What’s instructive here is Nugent’s defense against the “scammers” who would tell you that it’s racist to claim that there’s a “mindless tendency to violence we see in black communities across America,” namely that he has black friends, and employs black musicians to pay “tribute” to the black artists he, and the rest of Rock ‘n Roll, have stolen from.

The subject for Nugent’s column is the killing of Trayvon Martin, which he has made a second career of celebrating, but it’s really just a pretext to normalize racism in the guise of realism. Unfortunately, Ted is not alone in this endeavor, and not even alone on the right. What makes Ted special is that he so clearly demonstrates the fact that racists never think they’re being racist, they just think they’re telling the truth.

In Nugent’s case, he provides evidence of his non-racism using a new twist on the old “I have a black friend”  defense. After literally saying “before the racism scam industry unleashes their predictable, soulless lying hatred at me, my musicians include my dear black friend Johnny Gunnel,” he goes on to boast, repeatedly, that he’s busy “paying tribute to James Brown, Wilson Picket, Little Richard, Chuck Berry, Bo Diddly, Motown and the mighty Funkbrothers,” as if profiting off of their work constitutes some sort of generosity on his part. He goes on to note that his friends “have jobs, healthy bodies, are well-educated and extremely hard workers, don’t belong to gangs, care deeply about being the best that they can be and are willing to help and love everybody,” a slightly longer way of saying they’re “the good ones.”

But then, in continuing his character assassination of unarmed, dead teenager Trayvon Martin, Nugent asks a question that none of the jurors, none of George Zimmerman’s defense attorneys, and none of the evidence in the George Zimmerman trial have been able to answer. “We all know that Trayvon was minding his own business and only walking to his father’s home,” Nugent says, “But why would he viciously attack George Zimmerman?”

When all of the evidence that doesn’t come from the mouth of the proven liar of a killer tells us that George Zimmerman was pursuing Trayvon Martin with a gun, why would Trayvon Martin suddenly decide to attack George Zimmerman, an event which none of the non-killer-proferred evidence supports? Whatever you think happened during that altercation, no one else saw it begin, and only Rachel Jeantel heard it. Why would a scared kid being chased by a guy with a gun just suddenly attack that guy?

One possible answer is that he didn’t, is that George Zimerman started that fight, either by grabbing Trayvon or brandishing that gun at him, and that Trayvon acted to save his own life.

Another possibility is the one that Nugent offers, that Trayvon didn’t need a reason to attack George Zimmerman, because of “the same mindless tendency to violence we see in black communities across America.”

It’s one thing to discuss the disproportionate impact of crime and punishment on the black community, which happens to be disproportionately afflicted with the number one predictor of high crime, poverty. It is quite another thing to attribute those effects to a race-based “mindless tendency to violence.” Nugent didn’t even bother to encode his statement into “urban communities,” because he is so certain of the truth that black people have a “mindless tendency to violence” that it can’t possibly be racist to say it. Despite Nugent’s generous profiteering off of black culture and his wilingness to befrien those who rise above their mindless violet tendencies, he’s wrong, it isn’t true, and it is racist. At least now he can say he’s met one.