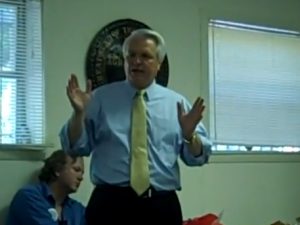 A video of Tennessee gubernatorial hopeful Rod Ramsey has gotten him into a bit of trouble. The video was shows Ramsey being asked by a man how he will defend constituents from the “threat that’s invading our country from the Muslims.” Ramsey then calmly looks the man in the face and tells him that the phrasing of his question slanders an enormous amount of peaceful, good hearted Americans. Oh, I’m just kidding. What Ramsey actually did was insinuate that Islam may be a cult and not a Constitutionally protected religion. Nice.

Here is a transcript of what Ramsey had to say with the cult talk highlighted by us (it’s all wonderful stuff though):

“QUESTION: I had an opportunity as I mentioned to you earlier to talk with Richard Foy (sp?) the other day, a representative from this area. He made a point that is of national concern at least in my mind and in my heart that is more of a national threat than it is to (inaudible) the state of Tennessee, we’ve got a threat that is invading our country from Muslims. What’s your stance on that?

RAMSEY: OK, well absolutely. Right now, I’ve been in Rutherford County where this all got started. This is so ironic. This, this is one of those questions that I ran for 17 months and nobody ever asked me about this until about a month ago, three weeks ago, in which, what happened is they’re trying to put a mosque into Rutherford County. I don’t know if y’all know this or not.

Now, I’m all about freedom of religion. I value the First Amendment as much as I value the Second Amendment as much as I value the Tenth Amendment and on and on and on. But you crossed the line when, when they start trying to bring Sharia law here to the state of Tenn, in the United States. We are a law- we live under our Constitution and they live under our Constitution. But it’s scary if we get there. It’s always arguable- and I’ve been studying this issue, but I’ll be right up front with you, like I say until two weeks ago, three weeks ago, nobody ever asked me about this on a governor’s race. And why do you ask about that? Til this mosque started coming in up there.
I’ve been trying to learn about Sharia law, I’ve been trying to learn about what going on-, it is not good if that’s what’s going on. Now, you could argue whether being a Muslim is actually a religion, or is it a nationality way of life, or cult whatever you want to call it.But certainly, we do want to protect our religions, but at the same times, this is something that we are gonna to have to face.

Right now, though, the most ironic part of what’s happening in Rutherford County is I’m in the real estate business, you want to get something re-zoned, if you want to get something put in-, that’s a three-month process. They approved that in 17 days [“mmm” from audience] in Rutherford County. The least they can do is back up, and say, let’s, let’s see what we’re doing over there, (inaudible) 53,000 square foot mosque in the middle of basically a neighborhood and they did it all almost overnight 5:16. So that has become an issue, and what an issue. I’ve tried to study up on it. But I’ve read enough about Sharia law to know that it’s crazy.

QUESTION: 22 communities have been established under Sharia law, and it’s expanding rapidly.

RAMSEY: I’d be willing to say, stay tuned that when I’m governor we’ll pass some kind of resolution or law or whatever it takes to say that it doesn’t-, I don’t see how it applies anyway, cause we’re about the Constitution. Just enforce our Constitution when they try to push that down our throats.”

The video was taken on the 14th of this month, the day that a Tennessee town faced protests outside of a planned Mosque construction site. While pundits on both side of the aisle have been repeatedly thrusting fingers at each other and screaming “RACIST,” this video is a clear example another kind of prejudice that some in this country aren’t even trying to hide anymore. It’s pretty frightening how acceptable it has become to say things about Muslims that one would never dream of saying about other groups.