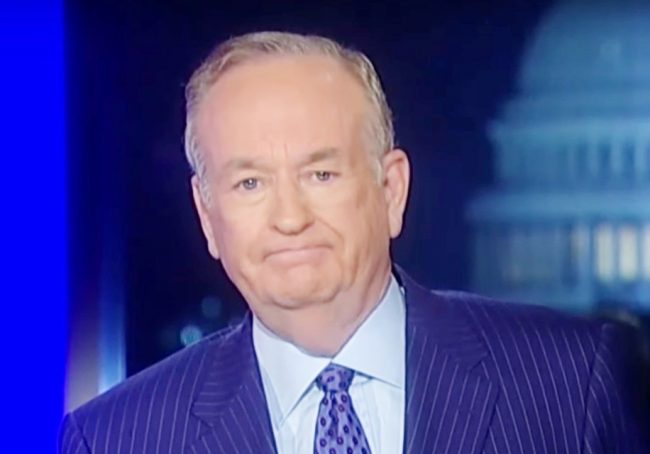 Companies are pulling their ads from Bill O’Reilly‘s commercial space in spite of the fact that he’s the most popular person on cable news.

– In 2004, O’Reilly was accused of and sued for sexual harassment by Andrea Mackris, a woman with whom he settled out of court. It was a huge story that became infamous for some of the lurid descriptions of O’Reilly’s behavior that the public was able to get access to, but it got squashed by the sands of time and Fox News’s infamously thorough PR division.

– In January of this year, our friends at LawNewz exclusively uncovered that Fox had settled with Juliet Huddy, a former host who accused O’Reilly and new Fox co-president Jack Abernethy of sexual harassment. (Abernethy is the co-president now because Roger Ailes left the network last summer amid an onslaught of allegations that he sexually harassed women at the company for years.)

– A few days ago, the New York Times revealed that five women who appeared on The O’Reilly Factor or worked with the anchor have gotten payouts from either O’Reilly or Fox News’ parent company, 21st Century Fox. As that report was breaking, Fox renewed O’Reilly’s contract. Somehow, this became the straw that broke the advertisers’ back.

Now, brands are pulling out of advertising during O’Reilly’s super-successful hour at a rapid pace. As of April 5 at 11:00 a.m. EST, here are all of the advertisers who have yanked their placements:

We are going to update this list as it grows.

For now, read the statement from Fox News about the loss of advertisers.

LegalZoom and ODFL, Inc. were added to the list above.

Jenny Craig and Visionworks were added to the list above.