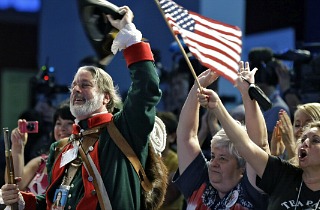 The Republican Party is beginning to regain the public trust. Once again, polls suggest, the American electorate is starting to see the GOP as a viable alternative to Democrats, who have been the governing party arguably since Republicans lost the confidence of the country in 2006. The once ill-defined contours of a Republican comeback having now become clearly visible, Republicans need to earn the trust of the American public who are turning to the GOP largely out of exasperation with President Barack Obama’s intellectually spent and flailing administration.

A surprising Wall Street Journal/NBC News poll released on Friday shows that the GOP’s efforts to rehabilitate their image with voters is beginning to bear fruit.

The poll showed that Republicans maintain their support with the voting public as the party most capable of reducing the federal deficit. Democrats lost their near 20-point advantage on that issue in 2009-2010 when the debate over massive spending programs contained in the American Recovery and Reinvestment Act and the Patient Protection and Affordable Care Act dominated the national discourse.

But Republicans are also winning over the public on issues that are traditionally outside their wheelhouse. Voters told WSJ/NBC pollsters that they trust Republicans over Democrats to manage the American economy. In 2012, Democrats held a narrow advantage on that issue. Voter’s trust in Democrats to look after the middle class, an issue they have dominated for decades, is nearing a historic low as the economic recovery stalls. Further, the Democratic edge over Republicans on which party is best to reform health care is down to only 8 points. This is “half the edge the party held on that issue in February,” writes WSJ’s Neil King Jr.

Finally, and perhaps most surprisingly, Republicans are earning high marks from voters on the issue of foreign policy. Following the collapse of their party’s historically high standing among voters on the issue of foreign affairs in the mid-2000s, as the Iraq War evolved into a prolonged, low-intensity insurgency, Republicans have fretted that Obama’s aggressive prosecution of the war on terror and his killing of Osama bin Laden may cement the Democratic advantage on foreign policy issues for a generation. Those fears now appear unfounded as WSJ/NBC found that Republicans enjoy a 7-point advantage over Democrats on the handling of America’s foreign affairs. A CNN/ORC poll released last week confirms these findings.

It is hard to make the case that this comeback is the result of an abundance of competence and strategic insight on the part of Republican lawmakers. While the Republican Party’s youthful and energetic strategists have deftly put the party on the correct path for a makeover, the GOP’s representatives in government have not helped shift public opinion as much as have the many failures of the president and his party.

The GOP is well positioned to press these emerging advantages as Democratic politicians appear content to assuage the concerns of their base voters with myths and fairytales.

Obama’s disastrous handling of his push for Syria, and his acceding to surrendering control of the situation to Russia, looks to the Democratic base to be the height of statesmanship. To the broader universe of voters, even though they may welcome the way out of a war they never wanted, it looks like fecklessness and incompetence. The White House’s failed push for new gun laws has squandered his opportunity to secure meaningful reforms in his second term, another fact his political base refuses to recognize. Even as Democratic politicians lose on the issue of new gun laws, Democratic leaders invent comforting fictions about “voter suppression” to appease their supporters rather than confront the reality of the unpopularity of their desired policy prescriptions.

And while Republicans can take comfort in the fact that the areas of policy where the public is warming to them again are those which most influence voters, peripheral issues and identity politics should not be overlooked. As 2012 demonstrated, claims that individual Republican politicians harbor unfriendly views to women or minorities – with varying degrees of legitimacy – can resonate with the electorate in the right political environment. Republicans would be well-served by not simply dismissing Democratic attacks on the party and its representatives as being bigoted. Along with a strong economic message, a Republican plan to reform the Voting Rights Act and extend the Violence Against Women Act, promoted loudly and regularly by prominent GOP officeholders, would go a long way towards neutralizing Democratic efforts to maintain Obama’s electoral coalition through appeals to identity politics.

Republicans cannot presume that Democrats will continue to make mistakes in perpetuity. Congressional Republicans will have to navigate a minefield as the continuing resolution and the debt ceiling debates take center stage in the next four weeks. The GOP is reaping the rewards of standing back and allowing the Democratic Party to fail on its own. Now, a cautiously proactive approach to press their advantage is the most prudent course of action for the party.

Voters are souring on Democrats as it becomes obvious that they are unable to govern. Republicans are benefiting from the electorate’s disillusionment, but they would be mistaken to see this shift as a reward for their own efforts. Democrats are losing the public trust, but Republicans have not yet earned it. Now they must demonstrate for voters why the GOP can once again be trusted with the reins of government.

— —
Editor’s note: This post has been republished from an earlier date – Jon Nicosia