The Producers Picketed for Being Offensive to Holocaust Victims

The Producers Picketed for Being Offensive to Holocaust Victims 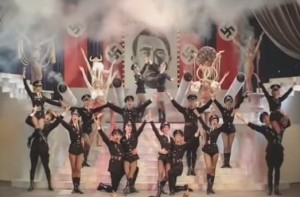 A Maryland production of the Mel Brooks musical The Producers was protested for its last three shows by a Jewish WWII veteran calling the show offensive.

“The problem is how people have gotten about Hitler,” Jeffrey Imm of the organization Responsible for Equality And Liberty told Washingtonian. “They’ve forgotten how horrible it is. They let the years go by with Hogan’s Heroes and all that. They’re not horrified by that.”

The Producers tells the story of two producers running a scam by creating a horrible pro-Adolf Hitler Broadway musical and pocketing the profits after it bombs. But in Springtime for Hitler’s big musical number, an effeminate gay man dressed as Hitler dances and sings his desire to conquer Europe, and the “satire”becomes a hit.

Imm says he recognizes that the play is a satire (Brooks is Jewish), but says that doesn’t make it less offensive to the six million Jewish victims of the Holocaust. “It would be no more funny if somebody did a comedy with a play that’s not going to work because it’s about Osama bin Laden. We cannot laugh about that.”

One of the ensemble members Brandon Ambrosino offered a rebuttal in Jewish magazine Tablet, noting that mocking Hitler robbed him of his power. “You can’t get on a soapbox with these orators, because they’re very good at convincing the masses they’re right,” he quotes Brooks as saying. “But if you can make them look ridiculous, then you can win over the people.”