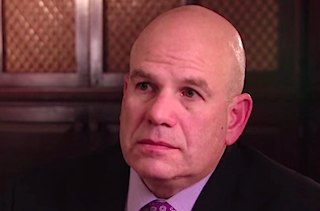 As destructive protests continue to rage in Baltimore Monday evening, following the death of Freddie Gray while in police custody, one voice who will forever be associated with that city has spoken out against the violence.

On his personal blog, David Simon, the former Baltimore Sun reporter who created HBO’s The Wire, who has been highly critical of Baltimore police over the years, has issued a call for peace.

After writing that “there is a lot to be argued, debated, addressed” and that “changes are necessary and voices need to be heard,” Simon issued this message to those rioting in the streets:

But now — in this moment — the anger and the selfishness and the brutality of those claiming the right to violence in Freddie Gray’s name needs to cease. There was real power and potential in the peaceful protests that spoke in Mr. Gray’s name initially, and there was real unity at his homegoing today. But this, now, in the streets is an affront to that man’s memory and a dimunition of the absolute moral lesson of his meaningless and unnecessary death.

If you can’t seek redress and demand reform without a brick in your hand, you risk losing this moment for all of us in Baltimore. Turn around. Go home. Please.

Earlier this year, Simon sat down with President Barack Obama to discuss criminal justice reform among other issues.

To my Beloved city Baltimore..I feel your pain. Stand up..rise UP without breaking down! Discipline not Destruction. #VictorynotVictims

Baltimore. These are not protestors. These are criminals disrespectful of the wishes of the family and people of good will.

I'm watching the Fruit of Islam, men of the Nation of Islam attempting to stop the violence and working with the police to restore calm

Watch live stream coverage from Baltimore below, via NBC News: