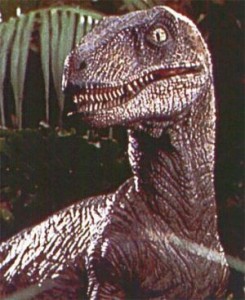 Yesterday, Kentucky Governor Steve Beshear announced that his state’s Creationism Museum will soon be joined by a creationism theme park named “Ark Encounter,” making Kentucky the unofficial creationism capital of our 6,000-year-old world. Some of the “edutainment” promised by the park include a Walled City, a Tower of Babel, and a “500-foot-long wooden replica of Noah’s Ark” that, as was revealed in the press conference, will feature dinosaurs.

A representative from Answers in Genesis, the group that will operate the theme park, stepped in yesterday when Gov. Beshear was asked by a reporter, “Will there be dinosaurs on the Ark?” The representative, who seemed better prepped on the issue than did Kentucky’s Democratic governor, replied,

Well, you know the position of Answers in Genesis so you can probably answer that yourself. We’ll have appropriate animals on the Ark based on—I’m sure we’ll have representative kinds of animals on the ark, to include dinosaurs.

Just like in Jurassic Park—except there, the “edutainment” value was a thinly veiled warning against defying the courses of natural selection and evolution. The creationism theme park, on the other hand, is more concerned with retelling “the Bible’s view of history,” which they assure us includes dinosaurs and human beings coexisting.

The theme park will cost $150 million and is scheduled to be finished in four years, approximately 1,454 days longer than it took to create Earth. But the clip below promises it’ll be worth the wait—dinosaurs! (h/t ThinkProgress and Barefoot and Progressive)