This New York Times Star Wars Correction Is the Worst 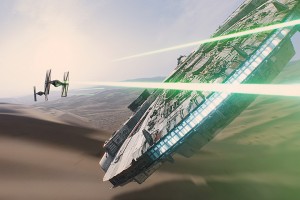 What the hell is journalism coming to in an age where The New York Times has to issue a correction because one of its travel writers “misstated” the name of the Millennium Falcon in Star Wars?

On Tuesday, travel writer Elaine Glusac wrote a piece titled “Star Wars: Coming to a Theme Park Near You” for the NYT travel section. It’s great short piece about Disney’s plans to implement the wildly successful creations of its recent purchase, Lucasfilm into both existing and new theme parks.

However, Michael Steel, a former spokesperson for the soon-to-resign Speaker of the House John Boehner, pointed out a rather interesting “addition” to the article earlier this morning:

.@ademillo The most amazing thing about this story is the correction: @nytimes initially got the name of Han Solo’s ship wrong.

The night before, The TODAY Show‘s social media manager, Anthony Quintano posted a screengrab of the correction for the TL;DR crowd:

This set off a collective Twitter tirade, fueled primarily by bored journalists:

@AnthonyQuintano is it wrong for me to love the NYT’s sweetly nerdy corrections like these?

This NYT correction killed my faith in media. http://t.co/I6axRkE8Vl pic.twitter.com/jB4COoJgZP

PLEASE LOOK AT THE CORRECTION AT THE END OF THE ARTICLE IT IS EVERYTHING: Star Wars’ Coming to a Theme Park Near You http://t.co/DgqDoPp7KU

Ever the NYT‘s Tweeter-in-Chief, writer David Itzkoff responded to it in the best way possible:

To those upset about a Star Wars correction in the NYT, I say live long and prosper