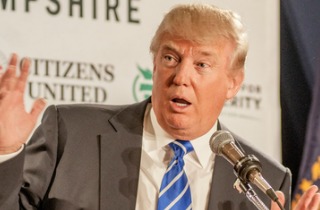 Donald Trump‘s campaign has banned The Des Moines Register from covering an Iowa campaign event tomorrow because of their editorial calling on him to get out of the race.

In case you missed it, the Register‘s editorial board put out a pretty brutal editorial calling Trump a “bloviating side show” and a “self-absorbed, B-list celebrity” who is “unfit to stand on the same stage as his Republican opponents.”

Trump fired back by calling them “sophomoric” and mocking their circulation numbers, but the paper reports tonight that one of their political columnists was denied a credential to a “family picnic” Trump is holding tomorrow morning.

And just so there’s no lingering questions, the Trump campaign specifically said it was due to the editorial.

Register editor and VP for audience engagement Amalie Nash put out a statement lamenting their decision:

We are disappointed that Mr. Trump’s campaign has taken the unusual step of excluding Register reporters from covering his campaign event in Iowa on Saturday because he was displeased with our editorial. As we previously said, the editorial has no bearing on our news coverage. We work hard to provide Iowans with coverage of all the candidates when they spend time in Iowa, and this is obviously impeding our ability to do so. We hope Mr. Trump’s campaign will revisit its decision instead of making punitive decisions because we wrote something critical of him.

The ultra liberal and seriously failing Des Moines Register is BEGGING my team for press credentials to my event in Iowa today-but they lie!