Jindal Deflects Gun Control Questions Over Lafayette: ‘Now Is Not The Time’

Jindal Deflects Gun Control Questions Over Lafayette: ‘Now Is Not The Time’ 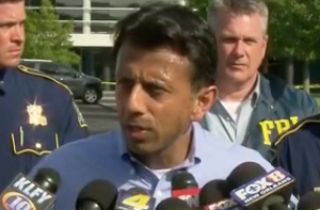 In response to the shooting at a movie theater in Lafayette, Governor Bobby Jindal returned to his home state and announced that he was suspending his presidential campaign while he was addressing the tragedy. Jindal, who has been politically opposed to gun laws in the past, spoke at a police conference Friday afternoon, and faced the inevitable question of whether the shooting called for a re-evaluation of control policy.

Jindal deflected the initial question, saying that the first 24 hours should allow the families a chance to grieve and for the victims to heal. “There will be an absolute appropriate time for us to talk about policies and politics, and I’m sure folks will want to score political points off this train as they’ve tried to do off previous tragedies,” Jindal said. “Let’s focus on these families.”

The reporter pressed onward, bringing up last week’s shooting in Chattanooga and remarking how acts of gun violence have become a recurring event in recent months.

“You want to be the leader of not only the United States but of the free world,” the reporter continued. “What would you do different to stop these things from happening all over the country?”

This dialogue between Jindal and the reporter carried on for a little while longer before Jindal emphatically said that now was not the time.

“I’m happy to talk about this but not here, not now. Now is the time to grieve, mourn, come together and show Lafayette’s resilient and we can get through this,” Jindal said. “I’m not shy of providing my opinions on any topic, but right now let’s actually focus.”